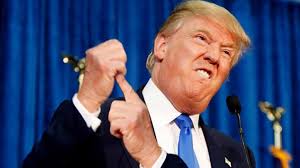 USA Editorial board declared Donald Trump unfit to be president “regularly incites political violence and is a serial liar, rampant xenophobe, racist, misogynist and birther who has repeatedly pledged to ban all Muslims — 1.6 billion members of an entire religion — from entering the U.S.”
Share:

USA Today, for the first time in its 36-year history, is taking a side in a presidential race, urging readers to vote against Donald Trump.

The newspaper, one of the most widely circulated in the country, published a scathing critique of the Republican nominee on Thursday, arguing that no presidential contest until now has warranted such a statement.

“This year, the choice isn’t between two capable major party nominees who happen to have significant ideological differences,” reads the editorial. “This year, one of the candidates — Republican nominee Donald Trump — is, by unanimous consensus of the Editorial Board, unfit for the presidency.”

The editorial continues: “From the day he declared his candidacy 15 months ago through this week’s first presidential debate, Trump has demonstrated repeatedly that he lacks the temperament, knowledge, steadiness and honesty that America needs from its presidents.”

The editorial lists reasons to vote against Trump, including his prejudiced rhetoric, his erratic temperament, his “checkered” business history and his dishonesty.

“Stay true to your convictions,” the board urged readers. “That might mean a vote for Clinton, the most plausible alternative to keep Trump out of the White House. Or it might mean a third-party candidate. Or a write-in. Or a focus on down-ballot candidates who will serve the nation honestly, try to heal its divisions, and work to solve its problems.

“Whatever you do, however, resist the siren song of a dangerous demagogue,” concludes the editorial. “By all means vote, just not for Donald Trump.”

USA Today’s editorial adds to a string of high-profile, anti-Trump statements by newspapers, including right-leaning publications.

On Tuesday, the Arizona Republic endorsed Clinton, the first time the paper hasn’t endorsed a Republican candidate in 126 years. (The paper has since lost subscribers.) The Cincinnati Enquirer made a similar break with a 100-year tradition by endorsing Clinton. (USA Today, the Arizona Republic and the Cincinnati Enquirer are all owned by Gannett.) The Dallas Morning News endorsed Clinton in June, and the New Hampshire-based Union Leader endorsed Libertarian nominee Gary Johnson, breaking a 100-year streak of backing Republicans.

Editor’s note: Donald Trump regularly incites political violence and is a serial liar, rampant xenophobe, racist, misogynist and birther who has repeatedly pledged to ban all Muslims — 1.6 billion members of an entire religion — from entering the U.S.