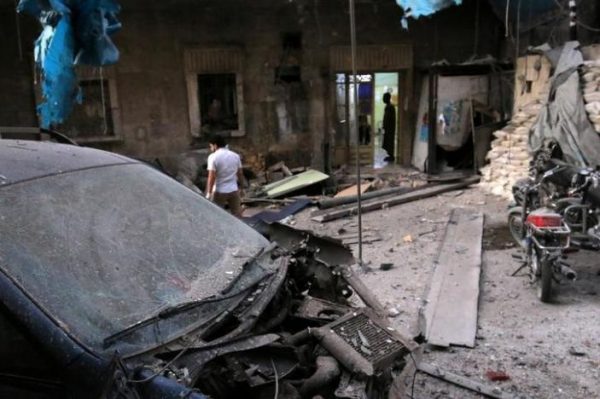 Medics inspect the damage outside a field hospital after an airstrike in the rebel-held al-Maadi neighbourhood of Aleppo, Syria, September 28, 2016. REUTERS/Abdalrhman Ismail
Share:

The two largest hospitals in the Syrian city of Aleppo were bombed early Wednesday, knocking them out of service and worsening an already dire medical crisis in the besieged city, medical workers said.

Two patients were killed and three hospital staffers injured in the pre-dawn attacks, including a nurse and an ambulance driver, according to the Syrian American Medical Society, which runs hospitals in opposition controlled areas of Syria.

Since a cease-fire collapsed last week, the rebel-held eastern portion of Aleppo has been subjected to what residents describe as the most intense bombardments yet of the five-year-old war, with waves of Syrian and Russian airstrikes sending sometimes hundreds of injured people streaming to the city’s few remaining hospitals in a day.

‘Aleppo is being burned’: Residents cope with airstrikes

One of the affected hospitals was hit by five artillery shells, the other by an airstrike, between 3:30 and 5 a.m., according to reports from medical workers. One of the hospitals held eastern Aleppo’s only trauma center, they said.

There are now fewer than eight hospitals still functioning for what the U.N. estimates are 275,000 people living in the rebel held city and just 29 doctors to treat the floods of injured people, said Adham Sahloul of the SAMS medical organization, who is in the Turkish city of Gaziantep.

Neither hospital was seriously damaged and both are expected soon to function again, but their temporary closure will deepen the already profound misery of those being injured in the bombardments, he said.

“This is going to reduce capacity. They are in areas that are hit quite often and are densely populated, so this is going to be a problem,” he said. “It is very dire.”

The pace of the bombardments has slowed somewhat in recent days after a weekend blitz that killed some 300 people and injured nearly 700. Patients piled up on the floors of the hospitals and spilled onto the sidewalks outside because there were not enough beds for such a huge influx, according to witnesses and videos and photographs posted on social media.

Neither hospital was seriously damaged and both are expected soon to function again, but their temporary closure will deepen the already profound misery of those being injured in the bombardments, he said.

“This is going to reduce capacity. They are in areas that are hit quite often and are densely populated, so this is going to be a problem,” he said. “It is very dire.”

“We had to take the difficult decision to let the difficult cases die and attend to those who had better chances of surviving,” said Mohammed Tareq, a nurse at one of the hospitals. “Everything was topsy turvy.”

On Tuesday, 26 people died in the bombardments, including 23 who were buried under the rubble of an apartment building when it was demolished by an airstrike, according to the White Helmets civil defense group.

Aleppo has been completely encircled by government troops for the past three and a half weeks, and there are fears that medical supplies soon will run out. One hospital has already run out of anesthetics and the surge of casualties over the past week has dangerously depleted supplies at other facilities, said Sahloul.

The bloodshed coincided with the announcement by the Syrian government that it had launched military operations to recapture eastern Aleppo from the rebels who have controlled it since 2012, squashing any remaining hopes that the cease-fire plan could be salvaged.

The government is pressing ahead with the offensive and on Tuesday announced that its forces had launched a ground assault along one of the frontlines near the center of the city, though there was no evidence one had taken place.

Diplomatic efforts by the United States and Russia to solve the crisis have meanwhile lapsed since a hostile exchange on Sunday at the United Nations in which the U.S. envoy Samantha Power accused Russia of “barbarism” for its support of the Aleppo assault.

There has been no further contact between U.S. Secretary of State John F. Kerry and his Russian counterpart Sergey Lavrov since the U.N. clash, the State Department said on Tuesday.

Kerry will not however give up the quest for a negotiated settlement to Syria’s war, spokesman Mark Toner said in Washington.

“He has not closed the door on this diplomatic process and, as the secretary of state, he’ll never do that,” he said. “But that said, we’re under no illusions, given the intensity of the conflict in and around Aleppo over the past 72 hours, with barrel bombs, indiscriminate bombings, that we’re anywhere near.”