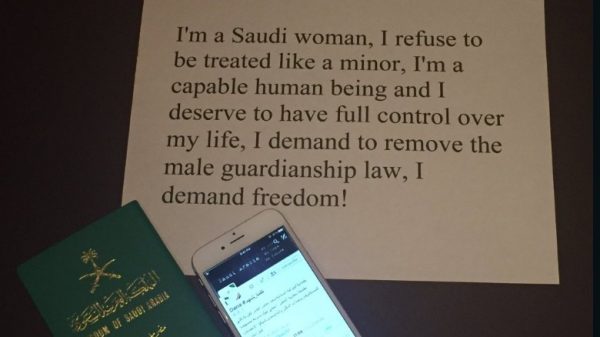 Saudi Arabian women’s rights campaigners are calling for an end to the country’s male guardianship system by sending telegrams and a petition to King Salman this week.

The campaigners, who are organizing on social media, want to stop the system whereby every Saudi woman is governed by a male guardian who provides permission for travel, marriage, and sometimes work or access health care.

“We want women over 18 or 20 to be treated as adults,” Saudi human rights campaigner Aziza Al-Yousef told CNN, “to be responsible for their own acts and allowed to make their own decisions.”

On Sunday, activists flooded social media with instructions on how to send a telegram to the king.
Activists said some of those who called to submit a telegram calling to end male guardianship had trouble with the operators.

“Some operators said it was illegal what the campaigners were doing, that it was forbidden by God,” Sahar Nasief, an activist based in Jeddah, told CNN.

On Monday, activist Aziza Al-Yousef took a petition she said had thousands of signatures to the Royal Court in Riyadh calling for an end to the system. The signatures were collected online, and many men also put their names forward, she told CNN.

Al-Yousef was turned away from the court and told to submit the petition by mail.

Campaigning on the issue intensified following a Human Rights Watch report in July which found that the guardianship system is “the most significant impediment to realizing women’s rights in the country.”

For more than two months, Saudi women have been posting online asking for an end to the system.

The country’s most senior religious authority, at the start of September, the Grand Mufti, called the social media campaign a “crime targeting the Saudi and Muslim society,” and said the guardianship system should stay.

Earlier this month, CNN spoke to a number of women involved in the online campaign.

“Women here are trapped, they can’t do anything,” one woman told CNN on the condition of anonymity. “It depends on your guardian. If he is OK, and if he is a good man, he’ll let you work, or let you study, which is a basic right. If he’s not, he’s going to prevent you from that.”

Al-Yousef, a longtime campaigner, told CNN she was “very proud of the young generation for being so involved in human rights and active on social media about it.”

Kristine Beckerle with Human Rights Watch who worked on the report told CNN that she’s urging the Saudi government to “listen to the demands of its female population and let women travel, study and make a whole range of other life decisions without a male guardian’s say-so.”