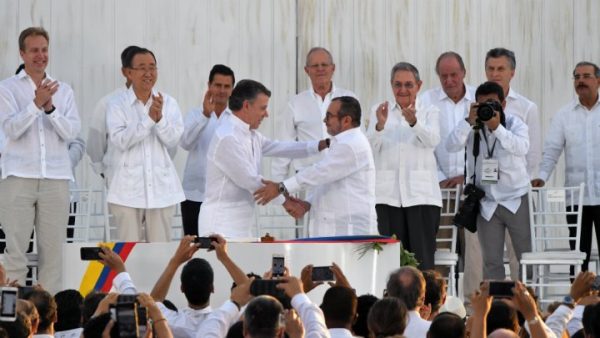 © Luis Acosta / AFP | Colombian President Juan Manuel Santos and the head of the FARC guerrilla Timoleon Jimenez shake hands during the signing of the historic peace agreement between on September 26, 2016.
Share:
The Colombian government and the leftist FARC rebel force signed a historic peace accord Monday to end a half-century conflict that has killed hundreds of thousands of people.

President Juan Manuel Santos and the leader of the Revolutionary Armed Forces of Colombia (FARC), Timoleon “Timochenko” Jimenez, signed the deal at a ceremony in the Caribbean city of Cartagena, prompting loud cheers from the crowd which included numerous international dignitaries.

The signing followed a four-year process to end Latin America’s last major armed conflict. The accord remains to be ratified in a referendum next week.

“Today we are experiencing the happiness of a new dawn for Colombia,” President Juan Manuel Santos wrote on Twitter ahead of the signing.

He called it “a new stage in our history — one of a country in peace!”

The two signed with pens made out of real bullets for the occasion.

The 2,500 attendees wore white for the 70-minute ceremony.

The European Union decided to suspend the FARC from its list of terrorist groups once the agreement is signed, EU foreign policy chief Federica Mogherini said in a statement on Monday.

The suspension will allow the temporary lifting of sanctions linked to FARC’s presence on the list — including the freezing of assets.

The country’s second-largest rebel force, the leftist National Liberation Army (ELN), agreed to hold fire ahead of the referendum.

The government has yet to begin planned peace talks with the Cuban-inspired ELN, saying it must first stop kidnappings.

Guerrilla armies were common across Latin America in the latter half of the 20th century. But now, 25 years after the Cold War, Colombia’s is the last major armed conflict in the Americas.

The FARC, a Marxist guerrilla group, launched its war on the Colombian government in 1964, in the aftermath of a peasant uprising that was put down by the army.

Over the decades, the conflict has drawn in several leftist rebel groups, right-wing paramilitaries and drug gangs. Colombian authorities estimate it has killed 260,000 people, left 45,000 missing and uprooted 6.9 million.

Under the deal, the FARC is now to relaunch as a political party. Timochenko, 57, is expected to remain its leader.

His real name is Rodrigo Londono but he is better known by the aliases Timoleon Jimenez and “Timochenko.”

“The war is over,” he wrote on Twitter. “We are all going to build the peace.”

At a remote jungle camp in El Diamante, western Colombia, FARC fighter David Preciado celebrated the looming accord by playing football with his comrades.

“We are aware that we have to move forward together, united… to finally achieve victory, giving power to the people by political means.”

The rebels came to the negotiating table after being weakened by an army offensive led by Santos when he was defense minister.

After he became president, four years of talks hosted by Cuba yielded a final, 297-page accord last month.

It grants an amnesty for “political crimes” committed during the conflict, but not for the worst atrocities, such as massacres, torture and rape.

The FARC’s fighters are to leave their mountain and jungle hideouts and disarm in a UN-supervised process. Colombian authorities estimate their number at more than 7,000.

Recent polls show the “Yes” camp in the lead to ratify the accord in the referendum on October 2.

Some Colombians resent the concessions made to the FARC, however. Former president Alvaro Uribe led a demonstration in protest at the signing on Monday.