Russia accused of barbarism and of war crimes in Aleppo, Syria 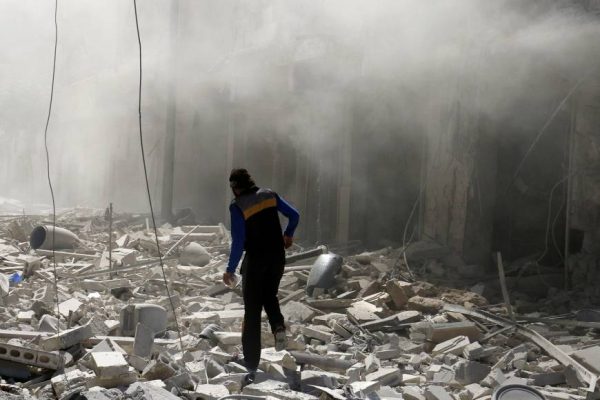 The U.S. accused Moscow of “barbarism” over the worsening carnage in Aleppo, as Syrian and Russian warplanes pounded the city in one of the heaviest bombing raids of the five-year war.

At an emergency meeting of the U.N. Security Council to demand Russia rein in its ally, Syrian President Bashar al-Assad, and halt intense airstrikes, Moscow and Damascus were repeatedly accused of war crimes.

“What Russia is sponsoring and doing is not counterterrorism. It is barbarism,” U.S. Ambassador Samantha Power said at the Sunday session.

Some 124 people, mostly civilians, have died since bunker-busting bombs and sophisticated weaponry were unleashed on residential areas in rebel-held eastern Aleppo after the army Thursday launched an operation to take it.

“It is difficult to deny that Russia is partnering with the Syrian regime to carry out war crimes,” said British Ambassador Matthew Rycroft, adding that the high-tech weaponry had inflicted “a new hell” on war-weary Syrians.

UN Secretary-General Ban Ki-moon has also warned the use of advanced weaponry against civilians could amount to war crimes, and French Ambassador Francois Delattre said the atrocities must not go unpunished.

Britain, France and the United States had called for the urgent talks after days of intense diplomatic efforts to salvage a U.S.-Russian cease-fire deal ended in failure at the weekend.

Ban called on world powers to “work harder for an end to the nightmare” in Syria that has left more than 300,000 people dead and driven millions from their homes.

To protest the attacks in Aleppo, the US, French and British ambassadors walked out of the Security Council chamber as the Syrian ambassador delivered his remarks.

Russian Ambassador Vitaly Churkin conceded that the surge in violence over the past days meant that “bringing a peace is almost an impossible task now.”

Churkin again laid blame for the failed diplomacy with the United States, accusing Washington of being unable to convince armed opposition groups that it backs on the ground to distance themselves from the al-Qaida-linked Nusra Front and abide by the cease-fire.

A U.S.-Russian cease-fire deal that would have charted a way forward towards peace talks was broken by the “sabotage by the moderate opposition,” he asserted.

Churkin however said that reviving the cease-fire was still a goal that Moscow could pursue if it was part of a “collective” effort on all sides.

Despite the recriminations, U.N. envoy Staffan de Mistura said a “tiny window of opportunity … still exists” for Russia and the United States to help Syria.

He appealed for renewed efforts to allow Syria to “step away from the brink of more years of bloody conflict which risks to become even worse.”

Residents said cluster bombs rained down on Saturday night on eastern parts of the city, where an estimated 250,000 people are living under a government siege.

At least 19 children were among those killed in the assault, which has included missile strikes, barrel bomb attacks and artillery fire, the Syrian Observatory for Human Rights said.

“All night long they were dropping cluster bombs. I couldn’t sleep until four in the morning,” said 62-year-old Ahmed Hajar, who was out looking for bread in the al-Kalasseh neighborhood.

In the nearby neighborhood of Bab al-Nayrab, 30-year-old Imad Habush was baking bread in a small wood-burning oven outside his house.

“None of the bakeries are open any more because of the bombing and the shortages of fuel and flour, so people have started making their own bread,” he said.

“I don’t know why the regime is bombing us in this barbaric way. We’re civilians here. We’re not carrying weapons, and we’re besieged. We have no way to escape.”

Air strikes were continuing on the eastern neighborhoods on Sunday, the Observatory said, with at least 25 civilians, including two children, killed since dawn.

Once Syria’s economic powerhouse, Aleppo has been ravaged by war and roughly divided since mid-2012 between government control in the west and rebel control in the east.

The eastern portion of the city has been under near-continuous siege since mid-July, causing food and fuel shortages.

Syria’s foreign minister said Saturday that his government was confident of “victory” with support from “true friends” including Russia, Iran, and Lebanon’s Shiite militant group Hezbollah.

Ankara, a NATO member and member of the U.S.-led coalition against the Islamic State group, launched an unprecedented ground operation in Syria last month, sending dozens of tanks to back pro-Turkish rebels fighting Kurdish militias as well as jihadists.