F-16 fighter jet buzzing through the skies of North Korea? 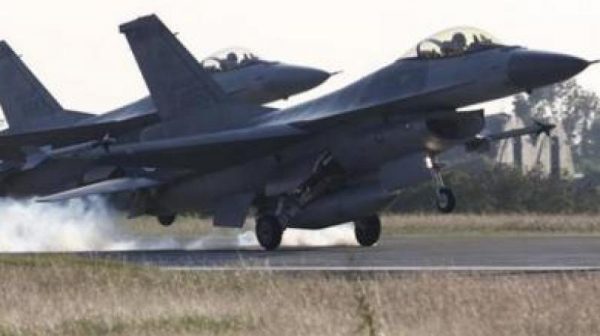 The plane roaring over people’s heads at the North Korea’s first air show Sunday was actually a remote-controlled mock-up of the fabled U.S Air Force fighter. (Photo: PTI)
Share:
Now here’s something you don’t see every day: an F-16 fighter jet buzzing through the skies of North Korea and launching – fireworks.

The plane roaring over people’s heads at the country’s first air show Sunday was actually a remote-controlled mock-up of the fabled U.S Air Force fighter.

The scale models of the F-16 and a Chinese J-10 fighter were featured on the second day of the Wonsan International Friendship Air Festival.

The choice of flying a one-sixth scale F-16 at the show was an odd one considering the outrage North Korea regularly expresses over the presence of U.S. troops and Air Force bases in South Korea.

The North was particularly outraged over recent flights by B-1B Lancer bombers, which are capable of dropping nuclear weapons, near the Demilitarized Zone that divides the Koreas in a display of power after the North’s fifth nuclear test, conducted Sept. 9.

The model fighters did, however, appear to please the crowd watching the air displays at Wonsan’s newly renovated Kalma Airport.

Thousands of North Koreans and hundreds of foreign tourists and journalists invited to the event – which is intended to showcase Wonsan’s tourism appeal – were given a rare glimpse of North Korea’s own air force fighters, including a MiG-29 and SU-25 ground attack fighter, acquired from Russia.

“This plane is faster than other airplanes and can maneuver quickly, so there is little time to think, you must make fast decisions,” Rim Sol, a MiG-21 pilot said, standing beside her fighter on the tarmac.

The Wonsan airport was long used by the North’s military but was upgraded and rebuilt to handle commercial flights, though it is unclear how it would fit into national flag-carrier Air Koryo’s very limited international flight schedule.

Officials refused to comment on the origin of the model F-16.

The air show’s first day opened with a aerobatic display by U.S.-made Hughes MD 500 military-use helicopters, the origin of which has raised questions of whether international sanctions against North Korea were violated.