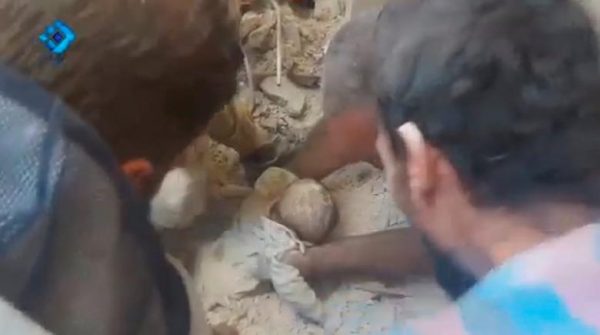 A still image from video posted on social media web sites shows a baby being rescued from rubble of a collapsed building in Aleppo, Syria. Social Media via Reuters TV
Share:

By Ellen Francis and Tom Perry | BEIRUT, LEBANON
Warplanes bombed Aleppo on Friday with what residents described as unprecedented ferocity after the Russian-backed Syrian army declared an offensive to fully capture Syria’s biggest city, killing off any hope of reviving a ceasefire.

Video images filmed by residents showed a young girl screaming as rescuers frantically dug her out of rubble, pulling her out alive. Another showed rescuers digging out a toddler with their bare hands, shouting “God is Great” as they lift him from the debris. The boy showed no signs of life as he was rushed off in a rescuer’s arms.

The apparent collapse of U.S.-backed peacemaking may mark a turning point in the five-year civil war, with the government and its Russian and Iranian allies now seemingly determined to crush the rebellion in its biggest urban stronghold.

“Can you hear it? The neighborhood is getting hit right now by missiles. We can hear the planes right now,” Mohammad Abu Rajab, a radiologist, told Reuters. “The planes are not leaving the sky, helicopters, barrel bombs, warplanes.”

The Civil Defense rescue group that operates in opposition areas said at least 70 people had been killed and 40 buildings destroyed. The Syrian Observatory for Human Rights monitoring body gave an initial death toll of 27.

Ammar al Selmo, the head of the Civil Defense, said the rescuers themselves were targeted, with three of their four centers in Aleppo hit.

“What’s happening now is annihilation in every sense of the word,” he told Reuters. “Today the bombardment is more violent, with a larger number of planes.”

The bombing came after the Syrian army announced overnight that it was launching an operation to recapture the rebel-held sector of the city. Western diplomats fear a bloodbath if the government unleashes a full-blown assault to capture the besieged opposition-held zone, where 250,000 civilians are still trapped.

“The only way to take eastern Aleppo is by such a monstrous atrocity that it would resonate for generations. It would be the stuff of history,” one Western diplomat said.

The assault left no doubt that the government of President Bashar al-Assad and its Russian allies had spurned a plea from U.S. Secretary of State John Kerry to halt flights to resurrect the ceasefire, which collapsed on Monday after a week.
Recovering full control of the rebels’ last significant urban area would be the most important victory of the war so far for Assad, strengthening his control over Syria’s most populous and strategically important regions.

In its late night announcement on Thursday, the Syrian military announced “the start of its operations in the eastern districts of Aleppo”. It warned residents to stay away from “the headquarters and positions of the armed terrorist gangs”.

An army source said on Friday that the offensive would be “comprehensive”, with a ground assault following air and artillery bombardment. “With respect to the air or artillery strikes, they may continue for some time,” he said.

Several residents said explosions had struck with far greater force than anything that had hit the city in the past, making bigger craters and bringing entire buildings down.

“I woke up to a powerful earthquake though I was in a place far away from where the missile landed,” said a rebel commander in a voice recording sent to Reuters. His group had “martyrs under the rubble” in three locations.

The offensive coincides with international meetings on Syria in New York, ostensibly intended to revive the truce announced jointly by the United States and Russia on Sept. 9.

But the collapse of that ceasefire – the same fate as all previous efforts to halt a 5-1/2-year-old war that has killed hundreds of thousands of Syrians – appears to have already doomed the peace bid, probably the last chance for a settlement during Barack Obama’s presidency.

The Syrian government, strengthened by Russian air power and Iranian-backed Shi’ite militias, has been tightening its grip on rebel-held districts of Aleppo this year, and this summer achieved a long-held goal of fully encircling the area.

The government already controls the city’s western half, where fewer people have fled. Before the war, the city held nearly 3 million people and was Syria’s economic hub.

The army made attempts to advance in several districts but was repelled said Zakaria Malahifji, a Turkey-based official for one of the main Aleppo factions. The Observatory said the army had made some progress in a southern district of the city.

On Thursday at the United Nations, the United States and Russia failed to agree on how to revive the ceasefire during what U.N. Syria mediator Staffan de Mistura called a “long, painful, difficult and disappointing” meeting.

Western countries pushed in the meeting for warplanes to be grounded everywhere in Syria apart from over areas held by Islamic State, but Russia has refused to accept the demand.

Assad remains defiant, saying on Thursday he expected the conflict to “drag on” as long as it is part of a global conflict in which the groups fighting him are backed by Saudi Arabia, Qatar, Turkey and the United States.