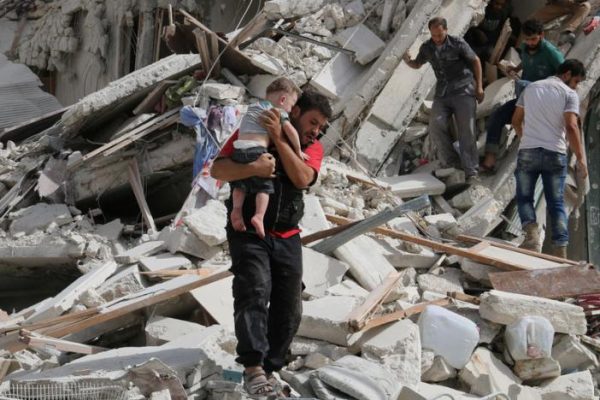 A man carries an injured child after airstrikes on the rebel held al-Qaterji neighbourhood of Aleppo. REUTERS/Abdalrhman Ismail
Share:
By Michelle Nichols and Tom Perry – UNITED NATIONS/BEIRUT
U.S. Secretary of State John Kerry demanded on Wednesday that Russia and the Syrian government immediately halt flights over Syrian battle zones, in what he called a last chance to salvage a collapsing ceasefire and find a way “out of the carnage”.

An impassioned Kerry faced off with Russian Foreign Minister Sergei Lavrov at the U.N. Security Council in New York, during a tense televised showdown, saying the bombing of an aid convoy in Syria raised “profound doubt whether Russia and the Assad regime can or will live up to” ceasefire obligations.

Speaking before Kerry, Lavrov told the 15-member Security Council: “One needs to refrain from emotional instincts, from rushing to the microphone immediately to comment on something; a probe should be conducted (into the aid convoy attack).”

Listening to Lavrov made him feel like he was living in a “parallel universe”, Kerry said.

“To restore credibility to the process we must move forward to try to immediately ground all aircraft flying in those key areas in order to de-escalate the situation and give a chance for humanitarian assistance to flow unimpeded,” Kerry said.

The key areas are places where humanitarian aid needs to be delivered and where Syrian government forces have been accused of targeting civilians.

The aim of the ceasefire deal between the United States and Russia, which took effect on Sept. 12, is to facilitate aid access to besieged areas and allow the pair to jointly target Islamic State jihadists.

More than 300,000 people have been killed and half of Syria’s 22 million people have been uprooted since a crackdown by President Bashar al-Assad on pro-democracy protesters in 2011 sparked a civil war. Islamic State militants used the chaos to seize territory.

The United Nations suspended aid deliveries after the convoy attack two days ago, which the Syrian Red Crescent says killed some 20 people, but the world body said on Wednesday it was gearing up to resume deliveries.

On the ground, rebels battled the forces of the Assad government on major frontlines near Aleppo and Hama, and air strikes reportedly killed a dozen people including four medical workers.

“I emphasize this to Russia. The United States continues to believe there is a way forward that, although rocky and difficult and uncertain, can provide the most viable path out of the carnage,” Kerry said.

U.S. officials believe Russian aircraft are responsible for the attack near Aleppo, but Moscow has denied involvement and the Russian Defence Ministry said on Wednesday a U.S. Predator drone was in the area when the convoy was attacked.

French Foreign Minister Jean-Marc Ayrault distributed a document on Wednesday to the U.N. Security Council outlining a new mechanism for monitoring the truce that it wants major powers to discuss later this week.

The ceasefire is probably the last hope for a settlement on Syria before President Barack Obama leaves office in January, and has been Kerry’s main focus for months. But it has become a repeat of previous peace efforts: abandoned by the warring parties even as diplomats far away debate it.

“I call on every country to cease providing support of any kind to any party that is trying to sabotage this plan,” Kerry said.

The Syrian army is backed by Moscow, Iran, Shi’ite militias and fighters from Lebanon’s Hezbollah, while the rebels are supported by countries including the United States, Turkey, Saudi Arabia and Qatar.

Kerry said it was a moment of truth for the opposition, which he said must do more to distance itself from the Nusra Front, long al Qaeda’s Syrian wing but which changed its name and disavowed al Qaeda two months ago.

Nusra is still characterized by both the West and Moscow as a terrorist group excluded from the ceasefire. Other rebels say Moscow and Damascus use this to justify broader attacks.

Tensions between the United States and Russia escalated over a Sept. 17 attack by the U.S.-led coalition against Islamic State that killed dozens of Syrian soldiers in the eastern Deir al-Zor province. Washington said that strike was carried out by mistake with the intent of hitting Islamic State militants.

Overnight fighting was focused in areas that control access to Aleppo city, where the rebel-held east has been besieged by Russian and Iranian-backed pro-government forces and completely encircled for all but a few weeks since July.

Syrian state media said the army had recaptured a fertilizer factory in the Ramousah area to the southwest of the city. The Syrian Observatory for Human Rights, a monitoring body, confirmed the advance and said government forces had pressed forward near an apartment complex nearby.

A rebel fighter in the Aleppo area said warplanes had been bombing all night in preparation for an attack. But “the regime’s attempts to advance failed,” said the rebel, speaking to Reuters from the Aleppo area via the internet.

A Syrian military source said insurgent groups were mobilizing to the south and west of Aleppo and in the northern Hama area. “We will certainly target all these gatherings and mobilizations they are conducting.”

The army reported carrying out air strikes on seven areas near Aleppo. The Observatory said one air strike killed four medical workers and at least nine rebel fighters in the insurgent-held town of Khan Touman south of Aleppo.

The medical staff killed were working for the Union of Medical Care and Relief Organizations (UOSSM), it said. UOSSM confirmed in a statement that at least four of its staff had been killed.

Syrian government forces also launched a major advance in Hama province in the West of the country.