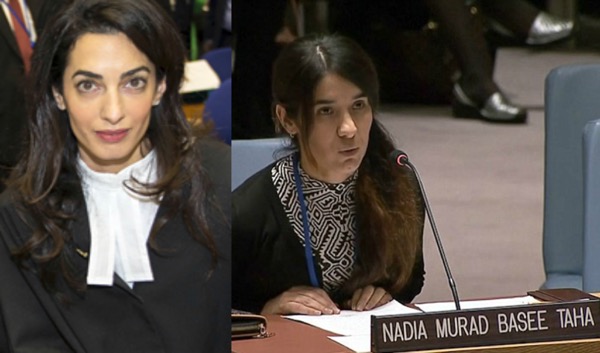 Joined by human rights lawyer Amal Clooney, a Yazidi woman who described praying for death while being raped by her Islamic State captors called on world leaders Monday to step up efforts to bring the militants group to justice for genocide and other crimes.

The two women said not one Islamic State militant has been tried for atrocities. British Foreign Secretary Boris Johnson suggested that could change soon.

Johnson, whose country helped organize a meeting of foreign ministers to address efforts to prosecute Islamic State militants, said he and Iraqi Foreign Minister Ibrahim al-Jaafari would urge the U.N. to take the lead on “the vital gathering and the preserving of evidence” of crimes committed by the group.

Nadia Murad, who was captured by the militants in 2014, said she was repeatedly raped and prayed for death until she escaped. Named U.N. special ambassador last week, the 23-year-old appealed to the world to “stop the extermination of my people.”

“Why is a survivor like me knocking on the door of the International Court of Justice to get justice?” she said at the meeting, held on the sidelines of the U.N. General Assembly summit.

Clooney, Murad’s legal representative, said Yazidi victims “want to appear before a judge.” She urged the U.N. Security Council to focus on “genocide against Yazidis.”

IS, she said, “has vowed to wipe them out simply because they are Yasidis” and noted that “there has not been a single member of ISIS held accountable anywhere in the world for its genocide.”

Earlier, Clooney told NBC’s “Today” show that she discussed with her husband, George Clooney, her effort to legally fight the IS group. She said he understands “this is my work.”