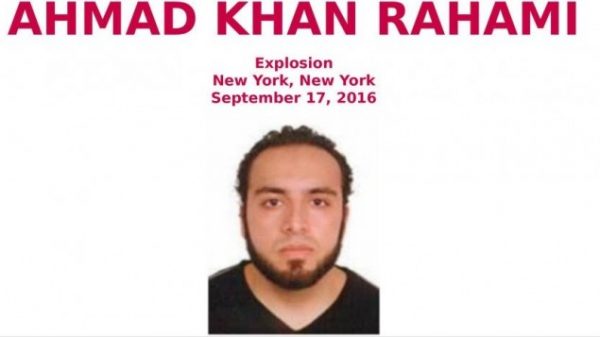 The ongoing investigation, now encompassing the discoveries of two bombs in New York City and in two cities in New Jersey, has given authorities leads on specific people that are urgently being sought.

A federal law enforcement official says BBs and ball bearings were among the pieces of metal that appeared to be packed into both pressure cooker bombs in New York. The one device that exploded on 23rd Street was partly under a metal trash container, which may have diminished the force of the blast.

A backpack containing multiple bombs was found Sunday night near an Elizabeth, New Jersey, train station, according to the FBI and the city’s mayor.

There was a suspicious package with multiple improvised explosive devices this evening at the Elizabeth Train Station in NJ. #Elizabeth


The backpack had up to five devices, Elizabeth Mayor Chris Bollwage said. It was found in a wastebasket, outside a neighborhood pub and located about 500 feet from a train trestle. No one was injured.
Around 9:30 p.m. Sunday, two men found the backpack and thought it might contain something valuable. They alerted police when they saw wires and a pipe, the mayor said. No cell phones or electronic timing devices were found on the devices, Bollwage said.
There is no indication whether the latest incident in Elizabeth is connected to the bombing in a New York City neighborhood that injured 29 people and the explosion from a garbage can near a charity run in New Jersey. In the other New Jersey incident, investigators discovered three pipe-bomb-type devices wired together, but no one was wounded.
Bomb technicians arrived to the scene in Elizabeth and sent in a robot to examine the devices. During the process, one of the devices detonated.

FBI Bomb Squad is on scene and continuing the investigation at the train station in Midtown Elizabeth. pic.twitter.com/qvmzsgisjC


“The robots that went in to disarm it, cut a wire and it exploded,” Bollwage said.
The remaining four devices in the backpack will be transferred in protective cases to a local site and then will be taken to the FBI laboratory at Quantico, Virginia, Bollwage said.
Police checked all garbage cans in the immediate area, but found no other suspicious items.
But on Monday morning, police continued searching on the area of Linden and Elmora streets, close to where the backpack was found. The search was connected to the ongoing terror investigation, a law enforcement source said.
Trains resumed Monday morning after the New Jersey Transit had suspended service going through Elizabeth station on Sunday night. Both New Jersey Transit and Amtrak warned of delays following the incident.
Elizabeth is located about 16 miles southwest of New York City.

In New York, investigation over Saturday’s bombing continued as surveillance videos showed the same man near the site of the explosion and another location where a pressure-cooker device was found four blocks away, multiple local and federal law enforcement sources told CNN.
CNN
Saturday’s explosion shook New York City’s Chelsea neighborhood and sent panicked people scrambling for cover. By Sunday, 26 of the injured who had been admitted to hospitals had been released.

A few blocks away from the blast site and shortly after the explosion occurred, investigators found one possible lead: a pressure cooker, with dark-colored wiring sticking out, connected by silver duct tape to what appears to be a cellphone, officials said.
Shortly before 9 p.m. Sunday, the FBI and NYPD conducted a traffic stop of a vehicle of interest in the investigation, according to a statement from FBI. No one has been charged with any crime and the investigation is ongoing, the statement said.

3 attacks on US soil

The blast occurred on the same day an explosion went off near a Marine Corps charity run in New Jersey and a man stabbed nine people at a Minnesota mall. Authorities are investigating all three incidents as possible terror acts.

The Department of Homeland Security is actively monitoring and participating in the investigations in New York and New Jersey. Investigators found similarities between the explosives used in both states, according to multiple law enforcement officials, but authorities said they have not concluded the incidents are linked.
“We do not have any specific evidence of a connection, but that will continue to be considered,” New York City Mayor Bill de Blasio said. “We’re not taking any options off the table.”

The blast occurred around 8:30 p.m. at 23rd Street between 6th and 7th Avenues. Investigators believe the blast was caused by an explosive device in or near a dumpster, a law enforcement source told CNN. Four blocks away on 27th Street, a pressure-cooker device was found with a piece of paper with writing on it close by, officials said.
Surveillance video shows a man dragging what appears to be a duffel bag with wheels near the site of the West 23rd street explosion about 40 minutes before the blast, according to multiple local and federal law enforcement sources.
About 10 minutes later, surveillance video shows the same man with what appears to be the same duffel bag on West 27th street, multiple law enforcement sources said.
In the video, the man leaves the duffel bag where police later found the unexploded pressure cooker. After he leaves, the video shows two men removing a white garbage bag believed to contain the pressure cooker from the duffel bag and leaving it on the sidewalk, according to a senior law enforcement official and another source familiar with the video.
Investigators have not determined if those two men are connected to the man with the duffel bag on both streets, the sources said.
The device was transported to the NYPD Bomb Squad facility at Rodman’s Neck Range in the Bronx.
NYPD and FBI Bomb technicians rendered the device safe. A forensic examination of the device and its components will be conducted at the FBI Laboratory at Quantico, Virginia.

‘New York is up and running’

New Yorkers will see an increased police presence around the city, de Blasio said.
Stepped-up security across the city is common as world leaders arrive for the United Nations General Assembly meeting, which is underway.
“You should know you will see a very substantial NYPD presence this week — bigger than ever,” de Blasio said.
New York Gov. Andrew Cuomo added that 1,000 additional New York State Police officers and National Guard troops will be deployed to patrol bus terminals, airports and subway stations.
“I want New Yorkers to be confident when they go back to work on Monday that New York is up and running and we’re doing everything that we need to do,” he said.

Ahmad Khan Rahami was named as suspect in NY, NJ bombings
Rahami is a resident of Elizabeth, New Jersey, where five explosive devices were found overnight Sunday at a train station.

The FBI says Rahami, a naturalized Afghan citizen, is “armed and dangerous.”

It isn’t immediately clear whether the apartment raided in Elizabeth earlier today is his residence.