Dozens injured in an explosion that rocked New York City 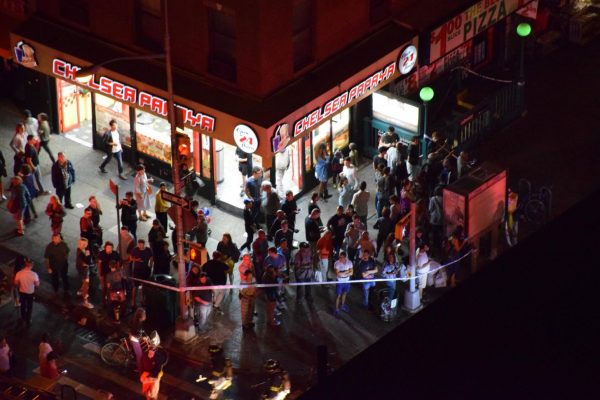 Explosion in Manhattan, NEW YOORK CITY (in Chelsea on 23rd St between 6th and 7th Ave). At least 29 were injured
Share:

Dozens of people were injured Saturday night in the Chelsea neighborhood of Manhattan in an explosion that New York Mayor Bill de Blasio called “an intentional act.”

At least 29 people suffered non-life-threatening injuries in the blast, which occurred on the street and not inside a building, according to the New York Police Department. One person was seriously injured, said Daniel A. Nigro, the New York fire commissioner.

Police officers, firefighters and other first responders rushed to the blast scene, which closed a major roadway, forced people out of nearby buildings and brought onlookers to the area.

De Blasio (D) said Saturday night that in the initial hours after the explosion, authorities had found “no evidence at this point of a terror connection to this incident.” 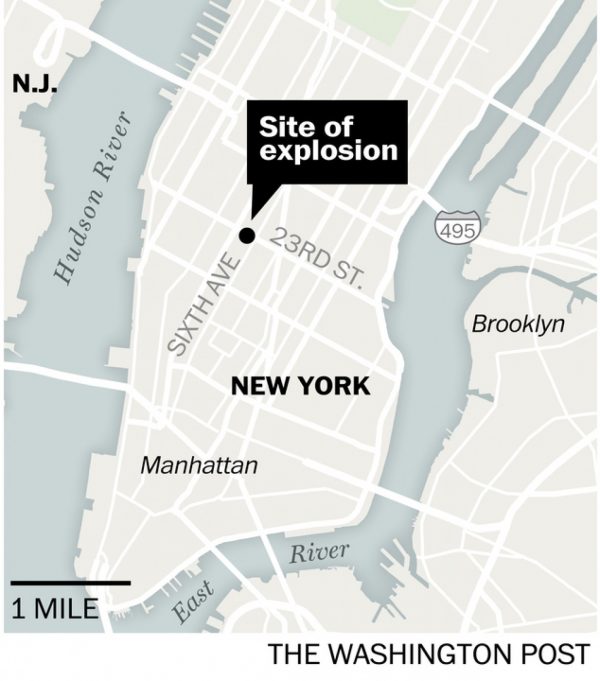 Although De Blasio said that the explosion was “an intentional act,” during a briefing late Saturday, he said little other information was available because the investigation was in its early stages.

“The exact nature and cause of this explosion has not yet been determined,” James O’Neill, the New York police commissioner marking his first day in the position, said at the news conference late Saturday. O’Neill did say that natural gas had been ruled out as a possible cause.

The New York Police Department’s counterterrorism bureau said it was responding to the explosion, which came hours after a pipe bomb exploded in a Jersey Shore garbage can shortly before a scheduled charity race there benefiting Marines and Navy sailors.

De Blasio said authorities had not found anything connecting the Chelsea and New Jersey incidents. He also said that there was no specific, credible threat against New York from any terror group.

While O’Neill said authorities were still trying to determine what, precisely, exploded, the New York Police Department’s counterterrorism bureau posted a photo online earlier Saturday showing what appeared to be a dumpster or garbage container mangled by a blast:

The FBI said it was involved in the response and the Bureau of Alcohol, Tobacco, Firearms and Explosives said its arson and explosives task force was being dispatched to the explosion scene.

Police in New York also reported shortly after 11 p.m. that they had found “a possible secondary device” a few blocks away from the explosion scene.

Officers were directing people away from this other intersection, and one could be heard telling pedestrians that “there is a possible explosive” in the area.

The explosion in the area of 23rd Street between Sixth and Seventh avenues happened at about 8:30 p.m. police said. Several of those injured were brought to area hospitals, J. Peter Donald, a police spokesman, posted on Twitter.

Photos and accounts posted on social media showed large crowds — as well as a large law enforcement presence — in the area near where the explosion occurred.

Soleil Filomena, 64, was leaving a convenience store at 7th Ave and 23rd street when she heard the explosion.

Filomena said she saw a “big black cloud in the sky.” After the explosion, she said her “ear was ringing for 15 minutes.”

When Keith Salomon of Delaware felt the explosion, he was having dinner a block and a half from blast. His chair and table shook and he saw people being taken away in ambulances.

“We didn’t know what it was and so at first we just kept eating,” said Salomon, 52, who was visiting his son in the city. “But then we realized something was wrong.”

Others did not hear the explosion but saw the aftermath. When Jacob Schulman left his apartment a few blocks away shortly before 9 p.m., he saw people running and screaming.

“I didn’t know what was going on but everyone looked so panicked I started running too,” said Schulman, 26, who has lived in the neighborhood since 2014.

Two blocks from the blast scene, a group of people emerged from a screening of the animated movie “Beauty and the Beast” and saw the flashing lights. One man who came out of the theater said he could not hear anything and had no idea about the explosion not far from where he was sitting.

President Obama was briefed on the situation in New York and will be updated as more information becomes available, a White House official said late Saturday.

Speaking in Colorado not long after the explosion, Republican presidential candidate Donald Trump quickly commented on the situation before much information was known.

“I must tell you that just before I got off the plane, a bomb went off in New York and nobody knows exactly what’s going on,” said Trump shortly after getting off of his plane. His comments were made before authorities confirmed the nature of the explosion.

The explosion in New York comes as foreign leaders, including many heads of state, are heading to Manhattan for the United Nations General Assembly. Secretary of State John F. Kerry arrived Saturday, while President Obama is scheduled to head to the city on Monday.

This annual meeting — held more than two miles from the site of the explosion in Chelsea — is traditionally a challenging time for New York, as many roads are shut down and the heavy security leads to increased traffic.