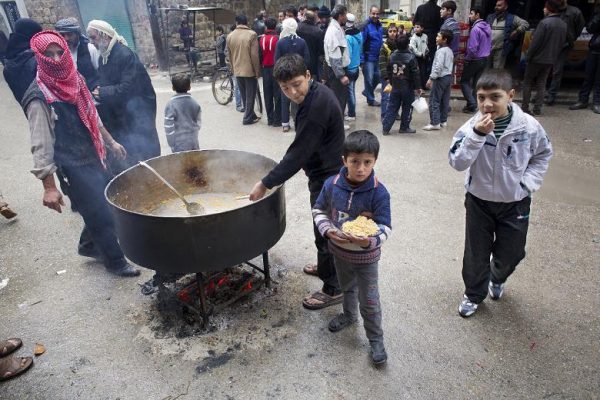 A Russian-backed regime onslaught in northern Syria was reported Wednesday to have killed more than 500 people this month, as Turkey faced mounting pressure to open its border to people fleeing the violence.

Tens of thousands of Syrians were still stranded Wednesday at the frontier north of the second city of Aleppo, which remained closed despite an appeal by the United Nations to let civilians pass.

The Syrian Observatory for Human Rights said 506 people had died since the regime launched a major offensive against rebels in Aleppo province on February 1.

They include 23 children who were killed in Russian air strikes, according to the British-based monitor, which relies on a network of sources on the ground.

More than 260,000 people have been killed and half the population displaced since the conflict began in 2011 with anti-regime protests.

Turkey, already hosting 2.7 million Syrian refugees, has so far refused to let a new wave into the country, instead providing humanitarian assistance over the border in Syria.

Only wounded people are being allowed through the Oncupinar border crossing, where around 30,000 displaced people are massed on the Syrian side.

Many are sleeping in tents or the open, with emergency camps already full.

A Turkish official said that 10 injured Syrians were taken to hospital in the border town of Kilis after bombing in the Syrian town of Azaz overnight.

The security threat posed by the Syria war was expected to be on the agenda of a two-day meeting of NATO defence ministers in Brussels starting Wednesday, as well as Turkey’s request for help to deal with the migration crisis and the alliance’s beefed up response to a more assertive Russia.

Those who have fled the offensive tell of scenes of terror and suffering.

“Children are dying under bombs and from hunger and cold. They are living on the roads. They don’t have any place to stay,” said Abdul Karim Bahloul, who crossed into Turkey on Wednesday morning.

Ankara is on alert for fighters infiltrating its territory, after a series of attacks on its soil that the government blamed on Daesh.

The Turkish security forces said on Wednesday they had seized explosives and four suicide vests in the baggage of a group of suspects stopped at the border in the southeastern town of Karkamis.

Karkamis faces the Daesh-controlled Syrian town of Jarabulus about 100 kilometres northeast of the Oncupinar crossing.

Fighting on Wednesday raged around Tamura, north of Aleppo city, with intense Russian air raids on several nearby villages, the Observatory said.

Pro-regime forces have made a series of gains this month in Aleppo province, severing rebel supply lines.

The UN has warned 300,000 people in eastern Aleppo city could be cut off from humanitarian aid if government forces encircle the area, a tactic used by the regime to devastating effect against other former rebel bastions.

Rebels face a potential tipping point in the war following a string of victories by regime forces backed by Russian warplanes and fighters from Iran – another key ally of Syrian President Bashar Al Assad.

Observatory director Rami Abdul Rahman said that 274 rebels and foreign fighters, 143 pro-regime fighters, and 89 civilians had been killed in the Aleppo offensive since February 1.

The UN has called for Russia to end its air strikes ahead of fresh peace efforts including a 17-nation meeting Thursday in Munich aimed at getting the process back on track.

Last week, UN envoy Staffan de Mistura suspended Syria peace talks amid opposition protests about the bombing, and the Munich meeting aims to pressure the sides to return to the table.

“The highest need and the best humanitarian response is for the bombing to stop,” UN aid chief Stephen O’Brien said Tuesday.

On Tuesday night, an aid convoy entering the besieged town of Madaya near Damascus to evacuate sick people came under fire from unknown assailants, but there were no injuries, the International Committee of the Red Cross said.