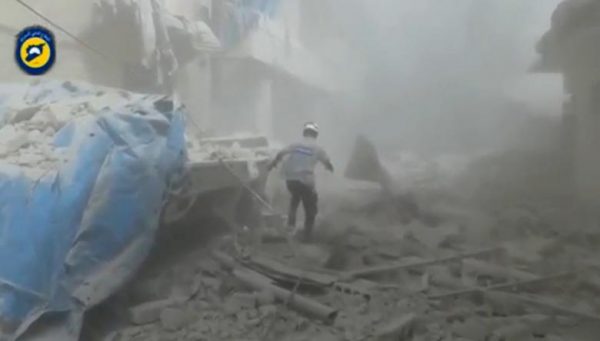 A still image taken on September 7, 2016 from a video posted on social media said to be shot in Aleppo’s Al Sukari on September 6, 2016, shows a civil defense member making his way through debris, after a chlorine gas attack by the Syrian army, Syria. Social Media via Reuters TV
Share:
By Barbara Starr

The US has bombarded an ISIS chemical weapons plant that was housed in a converted Iraqi pharmaceutical factory, a top Air Force commander said Tuesday.

Air Force Lt. Gen. Jeffrey Harrigian, the commander of the US Air Force’s Central Command, told reporters that 12 aircraft in all were used to hit the facility, which also served as an ISIS headquarters, at 50 different points.

“We don’t know for sure at this point” what chemicals were involved, Harrigian said at a Pentagon briefing.

The strike follows a United Nations-backed report issued last month that found that both the regime of Syrian President Bashar al-Assad and ISIS have used chemical weapons in the five-year-long war that has ripped the country apart.

The year-long investigation by the Organization for the Prohibition of Chemical Weapons found in August that Syria’s government — in particular its air force — had used chlorine gas at least twice since 2013. It also pointed the finger at ISIS for a mustard gas attack.

At the time, National Security Council spokesman Ned Price said the US-led anti-ISIS coalition had placed “a high priority on targeting” ISIS chemical weapons capabilities. “We will continue to remove leaders from the battlefield with knowledge of these weapons and will target any related materials and attempts to manufacture such chemicals going forward,” Price said last month.

Harrigian said the attack on the ISIS chemical facility took place Monday in the vicinity of Mosul. The aircraft involved included F-15s, A-10s, F-18s, F-16s and a B-52, he said.

The use of chemical weapons in Syria has been a point of intense international concern and political minefield for the Obama administration.
In 2012, President Barack Obama declared the use of chemical weapons a “red line” that would change his calculus on military intervention in Syria’s civil war. When he decided not to take action in August 2013 after the Syrian regime attacked a Damascus suburb with sarin gas, Middle Eastern and European allies, political opponents and even Democrats decried that decision.

The US instead pursued a 2013 agreement with Russia to rid Syria of lethal chemical agents that eventually led to the disposal of 1,200 tons of deadly material. That agreement allowed the Syrian regime to keep chlorine, which has non-military uses. Since weaponized chlorine is considered a chemical weapon, Syria’s use violated UN resolutions and the US-Russia agreement.
CNN