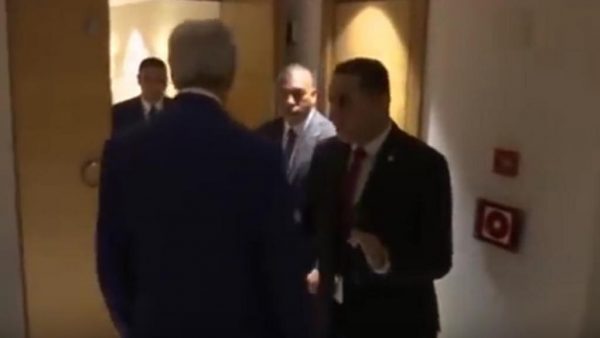 When it comes to their president’s security, the Egyptian authorities don’t mess around. US Secretary of State John Kerry saw this firsthand on September 1. As he was about to go into a meeting with Abdel Fattah Al-Sisi in New Delhi – the two politicians were in India at the time – an Egyptian bodyguard asked Kerry whether he had a phone or a camera on him, before letting him meet Sisi.

The incident amused many Egyptians, who joked about it under the hashtag #nomobilenocamera.

“Here’s what Sisi’s security found on John Kerry. His fate will be the prison of Al-Agrab [Editor’s Note: Al-Agrab is known for being the highest-security prison in Eygpt].”

“John Kerry is a liar. He was caught filming with his phone!” .

“A few facts that show that Sisi’s fears are well-founded.”

Asked about this strange incident during a press conference on September 7, a spokesperson for the State department explained – with a smile – that it didn’t bother them, and that sometimes those charged with ensuring the security of heads of state show excessive prudence.

The guard may therefore have been a bit overzealous… or simply failed to recognise John Kerry.

However, this is not the first time that Kerry has found himself in an embarrassing situation due to the Egyptian president’s security guards. In July 2014, a security agent made Kerry and his team go through a search with a metal detector during a visit to Sisi’s presidential palace.
FRANCE24 /OBSERVERS