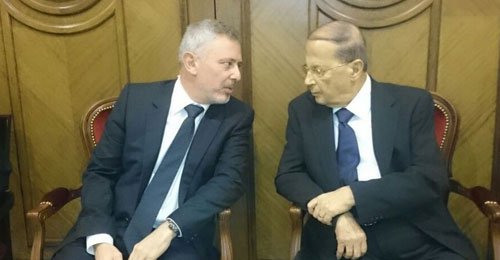 The speaker of the Lebanese parliament on Monday suspended a national dialogue of rival politicians after one of the main Christian parties walked out, deepening the country’s political crisis.

Speaker Nabih Berri took the decision after the withdrawal of the Free Patriotic Movement (FPM) which criticized the dialogue as pointless and condemned what it called contraventions of a national pact on sectarian power-sharing among the Lebanese.

“There is no benefit from the dialogue and its continuation, therefore we announced this position in cabinet, and we announced it now at the dialogue table,” FPM leader Gebran Bassil said in a statement reported by the National News Agency.

Lebanon, which is still rebuilding from its 1975-90 civil war, has been paralyzed by a political crisis exacerbated by the conflict in neighboring Syria.

The country has been without a president for more than two years because rival groups have been unable to agree on who it should be, and Prime Minister Tammam Salam’s unity cabinet has been paralyzed by divisions among its members.

The presidency is reserved for a Maronite Christian. The FPM is determined the next head of state should be its founder, Michel Aoun. His party has the biggest number of Christian seats in parliament.

Berri, a Shi’ite politician, had said he would suspend the dialogue if any of the main factions withdrew.

The FPM is an ally of the powerful Shi’ite group Hezbollah, which claims it supports Aoun for the presidency.

A row broke out between Bassil and Franjieh over the issue of Christian representation during Monday’s session. “Parliament Speaker Nabil Berri suspended the dialogue indefinitely on Monday … after a verbal row between two Christian leaders,” an official said.

Sets back Christians tens of years

Bassil’s rhetoric is “very dangerous” and involves “an inclination to revive an extremist trend in the Christian community,” senior Marada officials close to Franjieh told As Safir newspaper in remarks published Tuesday.

The sources told the daily that Bassil depicted the country’s political crisis as a “sectarian rift” when he “asked Muslims (during the dialogue session) whether they want to continue living with Christians or not.”

The Marada sources also noted that the FPM’s new ally, Lebanese Forces leader Samir Geagea, has not endorsed the FPM’s interpretation of the 1943 National Pact that stipulated Christian-Muslim partnership in running the country’s affairs and set the foundations of modern Lebanon as a multi-confessional state.

“Rabieh’s interpretation of the National Pact is selective and not based on unified standards but rather on shifting interests,” the sources added.

Hitting back at recent remarks by Bassil that the other parties in the cabinet represent only six percent of Christians, Franjieh said: “We acknowledge the FPM’s representation but we represent a lot more than six percent. I don’t know how the FPM’s ‘calculator’ works.”