Turkey vows to fight IS after attack kills 54, many children 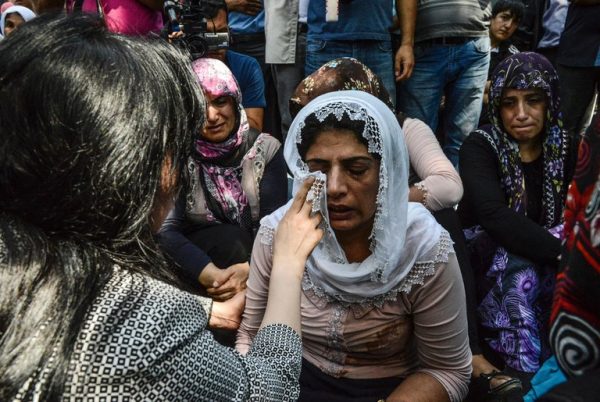 Mourners at a funeral on Sunday for victims of an attack on a wedding party the previous night that left at least 54 dead in Gaziantep, Turkey. Credit Ilyas Akengin/Agence France-Presse — Getty Images
Share:
Turkey is determined to fight Islamic State group extremists inside Turkey and in Syria, the Turkish foreign minister said Monday, after a suicide bomber attacked a Kurdish wedding party, killing at least 54 people, many of them children.

Mevlut Cavusoglu said Turkey would provide every kind of support needed to “cleanse” Turkey’s border with Syria of the extremists.

The death toll from Saturday’s attack increased to 54 as three more victims died in hospitals, the state-run Anadolu Agency reported. Nearly 70 others were wounded.

On Sunday, President Recep Tayyip Erdogan said the suicide bomber was a child between 12 and 14 years old.

But Prime Minister Binali Yildirim said on Monday that authorities were still trying to identify the bomber and didn’t know whether attacker was “a child or a grown-up.”

“A clue has not yet been found concerning the perpetrator,” Yildirim told reporters following a weekly Cabinet meeting, adding that the earlier assertion that the attacker was child was a “guess” based on witness accounts.

An official said at least 22 victims of the attack in the southeastern city of Gaziantep, near the Syrian border, were children younger than 14. The official couldn’t be named in line with Turkish government rules.

There was no immediate claim of responsibility, but officials have said it appeared to be the work of the Islamic State group, accusing it of trying to destabilize the country by exploiting ethnic and religious tensions. It was the deadliest attack in Turkey this year.

Responding to a question about reports that Turkish-backed Syrian opposition forces may launch an operation to free an IS-held town from Turkish territory, Cavusoglu said: “Our border has to be completely cleansed of Daesh (an Arabic name for IS). It’s natural for us to give whatever kind of support is necessary.

“(IS) martyred our … citizens. It is natural for us to struggle against such an organization both inside and outside of Turkey,” he said.

Cavusoglu said Turkey had become a main target for IS because of the nation’s efforts to stop recruits from crossing into Syria to join the fighting, as well as hundreds of arrests of IS suspects in Turkey. He said Turkey had also become a top target because of statements by Erdogan that the extremist group did “not represent Islam.”

The deadly attack also came amid struggles between the government and Kurdish militants linked to the outlawed Kurdistan Workers’ Party, known as the PKK, and as the country is still reeling from the aftermath of last month’s failed coup attempt, which the government has blamed on U.S.-based Muslim cleric Fethullah Gulen and his followers.

The suicide bombing followed a June attack on Istanbul’s main airport where IS suspects killed 44 people. A dual suicide bombing blamed on IS at a peace rally in Turkey’s capital, Ankara, in October killed 103 people.

The pro-Kurdish political party HDP condemned the attack on the wedding, which it said was attended by many of its party members.

Nihat Ali Ozcan, a security and terrorism expert at the Ankara-based Economic Policy Research Foundation of Turkey, said the attack on the wedding appeared to be retaliation by IS for recent Syrian Kurdish militia gains in Syria along the Turkish border.

“It appears to be an act to punish the PYD,” Ozcan said, referring to a Syrian Kurdish group whose militia is fighting IS. “It’s the cross-border settlement of scores by two actors fighting in Syria.”

Ozcan said the group chose a wedding party and sent a child to carry out the attack to increase the “shock” effect. He said the attack was most likely carried out by a local IS cell, who would know that the wedding was a Kurdish gathering.

More funerals were scheduled in Gaziantep for at least three of the victims on Monday. Fighting erupted during one of the funerals after some officials arrived with Turkish flags, angering the mostly Kurdish mourners who responded by hurling stones at them.

Among the guests at the wedding was Nursel Saglam, who was on a rooftop overlooking the outdoor celebrations. When she looked down after the explosion, everyone below was hurt or dead, she said.

“I can’t forget that moment,” she told The Associated Press, adding that she was not able to return to her house near the scene of the attack and was staying with her sister.

Shops closed in respect for the victims on the main street which leads to the side street where the attack occurred.

Halil Ilter said he was at home when he heard the explosion and rushed to the scene to check on his relatives. He lost five young cousins in the attack.

“I cannot recount what I saw,” he told Anadolu Agency. “I am not myself since. There is nothing to say, it was murder.”