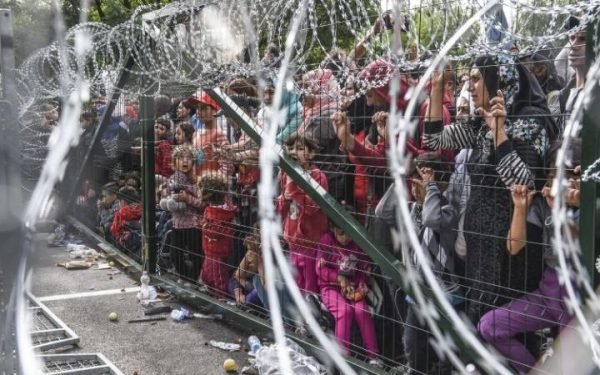 Gyorgy Schopflin, a member of ruling Hungarian Fidesz party, made that suggestion in response to criticism of local people who have put carved root vegetable, human-face-like masks along the border, believing they would repel migrants.

Muslims are barred from eating pork because pigs are considered unclean.

Over the weekend, Human Rights Watch director Andrew Stroehlein had written: “Refugees are fleeing war & torture, Hungary. Your root vegetable heads will not deter them.”

In a follow-up tweet, Stroehlein said: “Pig heads an ugly idea. Worse is reality of Hungary border abuses with violence against kids.”

In comments to Hungarian website mandiner.hu, Schopflin said Monday that the issue was a storm in a teacup.

“I did not humiliate anyone,” he said. “When I noted in reaction to a raised question that the pig heads would actually be more effective than masks carved from sugar beets, it was a small thought experiment, nothing else.”

The vegetable heads along the border with Serbia have been first reported by Hungarian media last week. There has reportedly been no effort by Hungarian police to remove them.

Human Rights Watch said in a report last month that migrants and refugees at Hungary’s border with Serbia were being summarily forced back, in some cases violently. Refugees, including many children, had been beaten with batons, attacked by guard dogs and sprayed by tear gas.