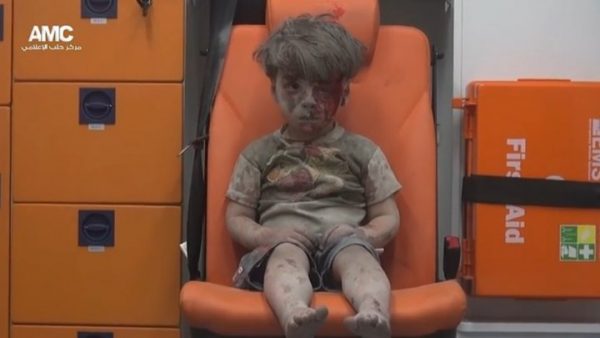 Screen grab from a video released by the Syrian opposition Aeppo Media Centre showing a young boy sitting in an ambulance, covered head to toe with dust, after being pulled from rubbles
Share:
Syrian opposition activists have released haunting footage showing a young boy rescued from the rubble in the aftermath of a devastating air strike in Aleppo.

The image of the stunned and weary looking boy, sitting in an orange chair inside an ambulance covered in dust and with blood on his face, encapsulates the horrors inflicted on the northern city and is being widely shared on social media.

A doctor in Aleppo on Thursday identified the boy as 5-year-old Omran Daqneesh. Osama Abu al-Ezz confirmed he was brought to the hospital known as “M10” Wednesday night following an airstrike on the rebel-held district of Qaterji with head wounds, but no brain injury, and was later discharged.

Doctors in Aleppo use code names for hospitals, which they say have been systematically targeted by government air strikes. Abu al-Ezz said they do that “because we are afraid security forces will infiltrate their medical network and target ambulances as they transfer patients from one hospital to another”.

In the video posted late Wednesday by the Aleppo Media Centre, a man is seen plucking the boy away from a chaotic nighttime scene and carrying him inside the ambulance, looking dazed and flat-eyed.

The boy then runs his hand over his blood-covered face, looks at his hands and wipes them on the ambulance chair.

Opposition activists said there were eight casualties overall from the air strike on Qaterji, among them five children.

The image of Omran in the orange chair is reminiscent of the image of Aylan Kurdi, the drowned Syrian boy whose body was found on a beach in Turkey and came to encapsulate the horrific toll of Syria’s civil war.

The video was released as fighting intensified between regime forces and rebels in Aleppo’s southwest Ramussa district.

State television announced on Wednesday that “12 martyrs including a child and several wounded after terrorists shelled the Salaheddin” district in the city’s regime-controlled west.

The Syrian Observatory for Human Rights said that 10 civilians including a child had been killed in the rebel shelling.

Since mid-2012, Aleppo has been roughly split between opposition control in the east and government forces in the west.