Russia uses Iran as base to bomb Syrian militants, as it deepens its involvement in ME 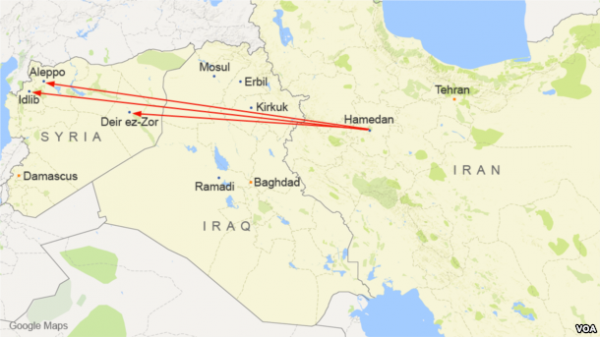 Russia used Iran on Tuesday for the first time as a base from which to launch air strikes against Syrian militants, widening its air campaign in Syria and deepening its involvement in the Middle East.

It was the first time Russia has used the territory of another nation, apart from Syria itself, to launch such strikes since the Kremlin launched a bombing campaign to support Syrian President Bashar al-Assad in September last year.

The Iranian deployment will boost Russia’s image as a central player in the Middle East and allow the Russian air force to cut flight times and increase bombing payloads.

The head of Iran’s National Security Council was quoted by state news agency IRNA as saying Tehran and Moscow were now sharing facilities.

Both countries back Assad. Russia, after a delay, has supplied Iran with its S-300 missile air defense system, evidence of a growing partnership that has helped turn the tide in Syria’s civil war and is testing U.S. influence in the Middle East.

Relations between Tehran and Moscow have grown warmer since Iran reached agreement last year with global powers to curb its nuclear program in return for the lifting of U.N., EU and U.S. financial sanctions.

The United States said it was still assessing the extent of Russian-Iranian cooperation but described the new development as “unfortunate”.

State Department spokesman Mark Toner said the United States was looking into whether the move violated UN Security Council resolution 2231, which prohibits the supply, sale and transfer of combat aircraft to Iran.

Voice of America reported  that the U.S.-led coalition fighting Islamic State in Iraq and Syria cleared the way for Russian bombers to pass through Iraq on their way to Syria via an airbase in Iran.

Col. Chris Garver, the coalition spokesman, told reporters via teleconference from Baghdad that the Russians notified the coalition about their planned movement through Iraqi airspace as per a memorandum of understanding for flight safety made between Russia and the United States months ago.

“They informed us they were coming through, and we ensured safety of flight as those bombers passed through the area and toward their target and then when they passed out [of Syria] again,” Garver said.