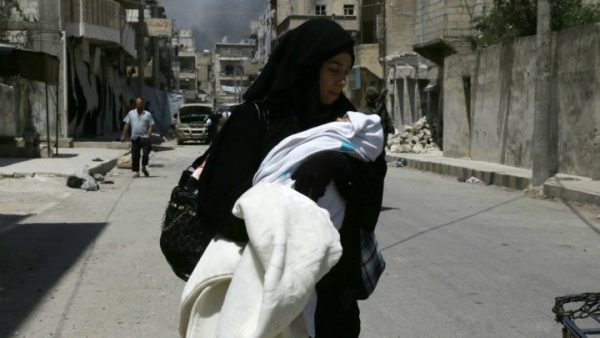 The Arab-Kurdish alliance known as the Syrian Democratic Forces (SDF) expelled most of the IS fighters from the town last week, but a small number remained.

“While withdrawing from a district of Manbij, Daesh (IS) jihadists abducted around 2,000 civilians from Al-Sirb neighbourhood,” said Sherfan Darwish, spokesman for the Manbij Military Council, a key component of the SDF.

“They used these civilians as human shields as they withdrew to Jarabulus, thus preventing us from targeting them,” he added.

Al-Sirb is a district in northern Manbij on the way to the IS-held border town of Jarabulus in Aleppo province near the border with Turkey.

The Syrian Observatory for Human Rights, which relies on sources on the ground to cover the conflict, also reported that IS had abducted around 2,000 civilians as they fled Manbij.

It said the civilians were placed in hundreds of cars that then headed for Jarabulus.

Darwish said the civilians who were taken were residents of Al-Sirb and other districts, including a central neighbourhood known as the “security quarter” in the centre of Manbij.

It was not immediately clear how many jihadists fled from the town, but reports last week after the SDF forces took Manbij said that dozens of IS fighters were holed up in the “security quarter”.

Darwish said that around 2,500 other civilians “held captive by the jihadists were saved” by the SDF.

The US-backed forces were meanwhile combing Al-Sirb on Friday for jihadists who could still be in the neighbourhood, he added.

With air support from the US-led coalition, the SDF began its assault on Manbij on May 31, surging into the town itself three weeks later.

But their offensive was slowed by a massive jihadist fightback using suicide attackers and car bombs, before a major push last week saw the SDF seize 90 percent of the town.

Tens of thousands of people lived in Manbij before the assault started in May.

The United Nations has said that more than 78,000 people have been displaced since then.

Manbij had served as a key transit point along IS’s supply route from the Turkish border to Raqa, the de facto capital of its self-styled Islamic “caliphate”.

The Britain-based Observatory says that the battle for Manbij has claimed the lives of at 437 civilians — including 105 children — and killed 299 SDF fighters and 1,019 jihadists.