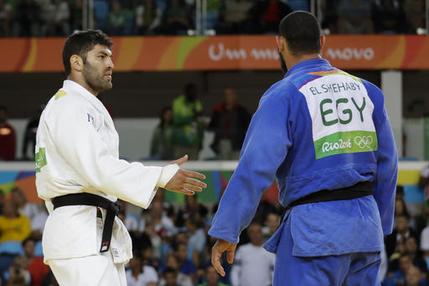 El Shehaby, an ultraconservative Salafi, had come under pressure before the games from Islamist-leaning and nationalist voices in Egypt to withdraw from the first-round heavyweight bout against the Israeli.

With about a minute and a half left in the bout, Sasson earned an automatic victory with two throws of El Shehaby.

The Egyptian lay flat on his back for a moment before rising and standing opposite Sasson in front of the referee. When Sasson extended his hand, El Shehaby backed away, shaking his head.

The referee called El Shehaby back to the mat and obliged to him to bow; El Shehaby gave a quick nod, and he was loudly booed as he exited.

Competitors typically bow or shake hands at the beginning and end of a match as a sign of respect in the Japanese martial art.

El Shehaby refused to comment, as did Sasson. The Israeli lost his semifinal match to top-ranked Teddy Riner of France but still has the chance to fight for a bronze medal later on Friday.

Asked about El Shehaby’s actions, Israeli team press attaché Brurya Bigman said: “This is his problem. It’s not our problem.”

She said she hadn’t spoken to Sasson about it and didn’t know how it had affected him.

“If you ask me, it’s a psychological thing,” she said.

Ofir Gendelman, Arabic language spokesman for the Israeli Prime Minister Benjamin Netanyahu, called the incident “shocking.” In a Twitter post, he said it “goes against the spirit of Rio 2016,” writing in Arabic said that “sports are not the field for politics and extremism.”

The International Judo Federation called it a sign a progress that the fight even took place between the two athletes.

“This is already a big improvement that Arabic countries accept to (fight) Israel,” spokesman Nicolas Messner said in an email. The competitors were under no obligation to shake hands, but a bow is mandatory, he added.

Messner said that even though El Shehaby ultimately bowed, “his attitude will be reviewed after the games to see if any further action should be taken.” He said the ethics commission of judo’s governing body would review the incident after the Olympics.

IOC spokesman Mark Adams said he hadn’t heard all the details but that the International Olympic Committee also would look into it.

“Things happen in the heat of the moment that are not acceptable,” Adams said. “We believe the Olympic movement should be about building bridges, not erecting walls. There’s absolutely no excuse for it.”

He acknowledged that sometimes athletes can’t bring themselves to shake hands with their competitors.

“It’s a shame if that happens,” Adams said.

Egypt’s Olympic Committee distanced itself from what El Shehaby did, saying the Egyptian was “alerted before the match to abide by all the rules and to have sporting spirt during his match with the Israeli player.”

“What the player did after the match, and not shaking hands with his rival, is a personal action,” the committee said in a statement.

Similar scuffles have happened before between Israeli and Arab judo athletes. At the quarter-finals of the 2011 judo Grand Slam in Moscow, Egyptian Ramadan Darwish refused to shake hands with Israeli Arik Zeevi. The next year, Darwish again declined to shake hands with Zeevi after beating the Israeli in their quarterfinal match at a tournament in Dusseldorf.

On Thursday, Moutaz Matar, a TV host of the Islamist-leaning network Al-Sharq, had urged El Shehaby to withdraw.

“My son, watch out. Don’t be fooled, or fool yourself, thinking you will play with the Israeli athlete to defeat him and make Egypt happy,” he said. “Egypt will cry; Egypt will be sad and you will be seen as a traitor and a normalizer in the eyes of your people.”

Egyptians clearly were divided before the match over whether El Shehaby should compete or withdraw, and there was a mixed reaction on social media afterward. Many blamed him for embarrassing the country, although some felt sympathy for El Shehaby, saying he was put under a lot of pressure.

In a Facebook post, journalist Galal Nassar said: “As long as you agreed to play an Israeli champion in the Olympics, you should have exchanged the greeting.”

He wrote that El Shehaby’s move backfired, and the Israeli player ended up with more sympathy. “We have lost in terms of sports and politics,” Nassar said.

Egypt was the first country in the Arab world to sign a peace treaty and normalize relations with Israel after decades of war.