Airstrikes in Syria’s Aleppo struck a market, a hospital and a village killing over 18 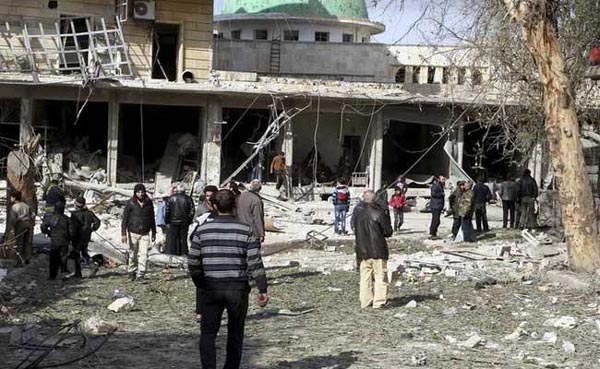 BY SARAH EL DEEB
Beirut, Lebanon- Airstrikes in opposition areas of Syria’s northern Aleppo province struck a market, a hospital and a village on Friday, killing at least 18 people, including children and two hospital staffers, activists and rescue workers said.

The air raids hit the only hospital for women and children in the town of Kafr Hamra before dawn, killing two staffers, including a nurse. The Syrian Civil Defense, a group of first responders, said it pulled 10 people alive from under the rubble.

Kafr Hamra is near the northern front line in the deeply divided city of Aleppo, where government troops have sealed the main route into opposition areas, effectively trapping nearly 300,000 residents.

The Syrian Civil Defense said one of its centers in the rebel-held part of Aleppo was hit. Pictures on the group’s Facebook page showed serious damage to one of its vehicles and crumbling walls.

The volunteer group said one of its most well-known members died after being buried under the rubble following a Wednesday airstrike in the Ramouseh area, recently seized by rebels from government forces.

Khaled Harah had recovered a live baby from a destroyed building in Aleppo’s Sukkari neighborhood in 2014 following a 16-hour rescue effort. “It was a miracle,” said Bibars Mishal, a colleague of Harah in Aleppo. Harah was later invited to the U.N. Security Council to testify about the violence in Aleppo. Mishal said Harah’s body was pulled from the rubble on Thursday.

The opposition fighters launched a counteroffensive last week, breaching the siege from the south. That road remains under fire, and the U.N. has asked for a cease-fire to allow aid into the area.

Health facilities have been frequently targeted in the civil war in Syria. Aid groups have said the month of July was one of the worst since the war began in 2011, with some 43 facilities in opposition areas partially or totally destroyed.

Despite calls for a cease-fire and Russia’s promise of a three-hour daily respite from airstrikes to allow in humanitarian aid, there has been no letup in the violence.

During the day Friday, airstrikes hit a market in the nearby town of Urem al-Kubra, killing at least six people, according to the Britain-based Syrian Observatory for Human Rights, which relies on activists on the ground. Urem al-Kubra lies on the road linking Aleppo to the northern rebel-controlled province of Idlib, which has also seen intense bombing.

In the northern Aleppo countryside, at least 10 people were killed, including children and women, when airstrikes hit the village of Hayan. It was not clear what the target was, but videos shared by activists of the scene of the attack show the bodies of women and children strewn on the side of the road as frantic residents scramble to recover them.

The Local Coordination Committees, an activist collective, said outdoor Friday prayers were called off in Idlib because of the intensity of the airstrikes.

German Foreign Minister Frank-Walter Steinmeier was quoted as telling Friday’s edition of the daily Frankfurter Allgemeine Zeitung that “humanitarian access can’t be under the single-handed control of one side of the conflict.”

“A unilaterally declared three-hour cease-fire per day isn’t enough to avoid a humanitarian catastrophe,” he said.