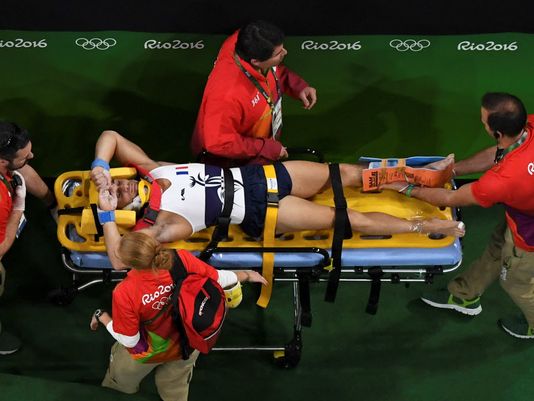 French gymnast Samir Ait Said, who broke his leg in qualification and then — adding insult to injury — was dropped on his way to the ambulance. USA TODAY Sports
Share:

Tragic French gymnast Samir Ait Said suffered further indignity after his devastating leg injury on Saturday – Olympics staffers dropped his stretcher as they were loading him into an ambulance.

A worldwide audience was horrified when Ait Said’s left leg snapped as he landed a vault during the men’s qualifying competition, with the lower half of his shin dangling grotesquely after the bone audibly snapped.

His ordeal took another bad turn following minutes later when he was removed from the auditorium to be rushed to a Rio hospital, where he remained late Saturday. As staff moved the 26-year-old’s stretcher towards the edge of the ambulance floor, they appeared to lose control, sending it falling heavily to the floor.

While Ait Said was little known in the United States before the incident that earned him the sympathy of millions, he is a popular figure in his homeland.


As details of his career history emerged, his plight became even more heartbreaking. Leading French gymnastics correspondent Anouk Corge of national sports daily L’Equipe told USA TODAY Sports that Ait Said had suffered the same injury in the build-up to the London Olympics four years ago.

“It was two months before London and it was the same thing, except to his other leg,” Corge said. “It was on a vault, he landed, and the leg broke in the same way. It was terrible then and for it to happen again is traumatic.”

Ait Said was being watched in Rio by his mother, father, sister, girlfriend and best friend. The group was visibly distraught in the minutes following his injury as he was attended to by medical staff on the floor of the Rio Olympic Arena.

Ait Said had qualified for the final of the rings competition and was hopeful of a medal in that event, having claimed gold in the discipline at the 2013 European Championships.