Where are the Syrians in Assad’s Syrian Arab Army? 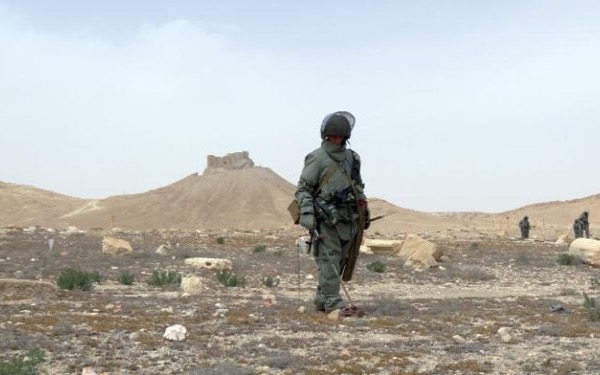 A Russian army sapper checks for mines left by ISIL militants in the ancient Syrian city of Palmyra CREDIT: MAX DELANY/AFP
Share:
The video shows the attack on Palmyra, the historic Syrian city reclaimed from Isil for the Assad regime, and as a column of troops heads across the desert behind him a soldier is giving a commentary.

“Despite many casualties, they are moving forward in the advance,” he says.

The oddity is that he is not speaking Arabic, but Persian. The man himself is Afghan, a member of a 10-20,000-strong Afghan army recruited in Iran to fight the war in Syria.

The reconquest of Palmyra was presented to the world as a victory for President Bashar al-Assad’s Syrian Arab Army.

As Islamic State jihadists fled, regime troops forced their way into the town, known for its celebrated Roman ruins. Everyone from Russian apparatchiks to British conservative politicians congratulated Mr Assad for reclaiming the town for civilisation.

The role of the Russian air force in preparing the way for the ground advance was noted: this was the anti-Isil alliance promised at the start of Russian military intervention in Syria but which in practice seemed slow to make gains.

In fact, it is now clear it was an eccentric multinational force that took Palmyra. Analysis of photographs, social media posts and Iranian, Russian and even Syrian media has shown that the path was led by the Russians, with much of the “grunt” work done by Afghan Shia and Iraqi militiamen under generals from the Iranian Revolutionary Guard.

And with Isil suffering defeats in Iraq to a similarly eccentric mix of American war-planes, Kurdish and Yazidi irregular forces, semi-formal Shia militias loyal to Iran, and tribal fighters, the question is being raised: if Isil is defeated, what takes over?

Diplomats and analysts say it is unclear who will actually be able to control and run liberated areas.

“The danger here is that the various actors, particularly the US and Russia, in their rush to declare immediate results, overlook the long-term components of stability in this area,” said Noah Bonsey, who monitors the conflict for the International Crisis Group.

For the first time, clear evidence emerged in Palmyra of not only Russian special forces but Russian mercenaries connected directly to President Vladimir Putin on the front lines.

A photograph posted online by Isil of captured munitions showed an unusual type of hand grenade.

It was identified by a team from the Armaments Research consultancy as an MIB “grenade mine”, a Russian explosive device that is mostly used by its special forces.

Since then, unchallenged reports have appeared in a St Petersburg newspaper, Fontanka, that a private Russian mercenary company was taking part in the Syria campaign – and taking casualties. Some members reported taking part in the battle for Palmyra.

The company, known as “Wagner”, is based in the same Russian town, Molkino, as the 10th Brigade of GRU military intelligence special forces, according to Fontanka, which interviewed its operatives.

It has lost members in both Ukraine and Syria – and they have been personally honoured by President Putin, despite private military contracting firms being illegal in Russia.

One platoon of Wagner fighters is said to be not even Russian but Serb – adding yet another nationality to the fighters from around the world fighting on all sides of the conflict. The leader of this group, Davor Savicic, a Bosnian Serb, was nicknamed “Elvis” and celebrated for his “kill record” when fighting in the civil war in his own country two decades ago.

The Russians played an advance role in the attack on Palmyra. But the final surge came only after Iran poured in troops, a desperate surge in reinforcements after the attack had been seemingly held up.

The army was already heavily supplemented by Iran-trained Shia militias from Iraq, and by Hizbollah, Iran’s Lebanese ally.

Syrian marines were diverted from the defence of Latakia – President Assad’s home province – but suffered a disaster when, according to reports, they were hit by Russian Air Force “friendly fire” and 17 killed.

Units of Syria’s own Iran-trained militias, the National Defence Forces were added, before finally fighters from the Afghan Shia Fatemiyoun Brigade – those seen in the video – arrived.

The Fatemiyoun are largely recruited not from Afghanistan itself, which has a large Shia minority, but from Iran’s large population of Afghan refugees and migrants.

A report by the BBC World Service due to be broadcast this weekend interviewed Afghan refugees in Europe describing how they had been given the choice of being returned home or joining up to the brigade. Instead, they ran away.

It also showed videos of the now regular funeral processions in the Iranian towns where Afghan migrants have congregated. One count says more than 260 have been killed, among them the brigade’s original leader, Ali Reza Tavassoli.

Following the victory in Palmyra, Iranians seem to have come to an even greater realisation that the Assad regime is dependent on Tehran’s military support – particularly if President Putin implements his threat to withdraw from the conflict.

Abu Mohammed al-Halabi, a nom de guerre for a leader of the Levant Front, an alliance of non-Isil rebels fighting around Aleppo, told The Telegraph: “Iran is sending in more troops. The regime doesn’t undertake a serious attack without Iranian support.

“Beside the Iranians, there are Iraqi, Afghani fighters. The Lebanese Hezbollah is there but not with large numbers.”

Last week, Iran announced that it was for the first time supplementing its forces in Syria with marine units of the regular army – the first time the army has been deployed to an international conflict since the war with Iraq in the 1980s.

That indicates a significant escalation, and raises the question of whether Iran is acting in concert with President Putin to try and reinstate Assad regime rule over the whole country, or reacting to his surprise withdrawal announcement..

Mr Putin has previously said that he is not going to support Mr Assad to the bitter end, and has put his weight behind peace talks in Geneva.

His generals are reported to be unhappy at the prospect of being sucked into the war, and scornful not just of the Syrian fighting forces’ capabilities but even of their new Iranian militia allies.

“For now, both Russia and Iran have an interest in the survival of the regime,” said Nikolay Kozhanov, a former Russian diplomat in Iran and now an analyst. “But they clearly understand that when it comes to the long-term future of Syria, they will be concentrating on different things. There are bound to be clashes.”