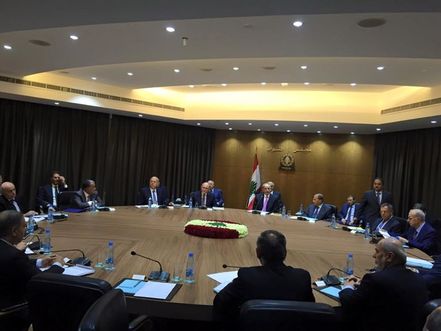 The Taif Accord which was established in 1989 stipulated that a senate would be established that would ensure that the rights of all various confessions are preserved and protected.

A statement issued by the press office of Speaker Nabih Berri said that attendees referred the administrative decentralization proposal to Parliament’s joint committee. The statement added that workshops will be held to pave the way for the establishment of a senate.

“The members of the national dialogue will have to provide Berri with the names of their representatives to the workshops ahead of Sept. 5,” when the next national dialogue sessions is scheduled to take place, according to the statement. “The workshop aims at drafting a law regarding the senate that will be referred to the relevant parliamentary committees for further study.”Former Interior Minister Ziad Baroud had previously authored a guide on how decentralization might take place. “[Phalange Party Head MP] Sami Gemayel will be proposing this guide to Parliament’s subcommittee,” Majdalani said.

Gemayel reportedly opposed all discussion over the establishment of a senate, insisting that the presidential crisis should be a priority.

“Studying new [political] reforms must happen in Parliament and nowhere else,” Gemayel said. “Shelving the new electoral law until a new senate [is agreed on] means extending the political vacuum.”

Commenting on the dialogue session ,  Shafiq Masri,  constitutional expert and professor of international law at the American  University of Beirut and the  Lebanese American University  in Beirut , he said , The proper legal sequence calls for  holding presidential elections before the parliamentary”, pointing out that that there is a law in force ( the 1960th law) that should be used as the bases for the parliamentary election . He told the “Middle East”: “But the obstacle is not the law, that will be used as  the basis of these elections, but how to form a new government if there is no   president  who will be in charge of the   parliamentary consultations that lead to the appointment of a Prime Minister who will in turn form the government ?.”

Amal Movement leader, Speaker Nabih Berri ( who hosts the dialogue sessions) postponed the election to August 8, 2016. But as in the preceding 42 sessions no one in Lebanon expects a president to be elected

Iran’s influence in Lebanon is at odds with all the countries supporting opposing political camps.