OK to have sex slaves under Islam, says Muslim preacher 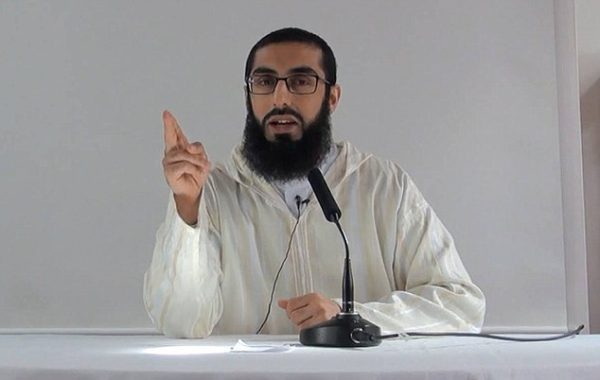 A hardline Muslim preacher suspected of radicalising three British jihadis told teenage disciples that it is ‘permissible’ under Islam to have sex slaves.

Ali Hammuda, an Imam at a Cardiff mosque where three young jihadis from the city worshipped before travelling to Syria to join Islamic State, also told the group of boys as young as 13 that the ‘day of judgment is close’ – a key part of IS’s warped propaganda.

The revelations come amid heightened fears over the Islamist terror threat in the UK in the wake of the bloody attacks in France.

Hammuda is still preaching at the same mosque, two years after the three ‘Cardiff jihadis’ – Nasser Muthana and Reyaad Khan, then 20, and Muthana’s younger brother Aseel, then 17 – left for Syria in 2014.

The cleric’s extraordinary preachings were recorded secretly at a halaqa, or religious study circle, at the Al-Manar mosque by an undercover reporter. The event was publicised by posters mimicking the famous British wartime propaganda slogan, declaring Keep Calm And Come To Halaqa. Fringed by drawings of sports equipment, the poster added: ‘Brothers Only, Ideal age 13-18. Followed by indoor football.’

In the most damning section of the recording, Hammuda, the English Islamic Programmes officer at the mosque, explains a series of Hadiths, or sayings of the Prophet Mohammed with his group. He inserts his own twisted interpretation of a Hadith in which the Prophet says one of the Doomsday signs will be when a slave girl gives birth to her master.

At no point does Hammuda, who was born in Palestine but brought up in the UK, point out that slavery is no longer permitted in Islam, nor indeed that it is illegal in the UK.

The hitherto unbroadcast audio tapes, recorded by TV company Hardcash Productions in an investigation into jihadis, were made in October 2014 – only weeks after reports of IS atrocities against the minority Yazidi sect in northern Iraq, whose women were enslaved, raped or executed after being captured by the IS thugs.

More than 5,000 Yazidi women and girls were abducted by IS when the militant Islamist terrorists attacked the city of Sinjar, northern Iraq, in August of that year. Some who managed to escape later told their stories and were photographed in a series of arresting images wearing traditional white Yazidi wedding dresses to help emphasise their horrific ordeal.

In other recordings, Hammuda speaks of music being ‘a sickness’ and a ‘tool of Satan’. The 28-year-old also used to give talks at a school attended by Nasser Muthana and Khan. They both appeared on an IS recruiting video. Khan was killed in a drone strike last year.

Undercover reporter Rizwan Syed, who made the recordings, also found a range of extremist literature available, such as Music Made Me Do It, which describes the harmful social, psychological and physical effects of music on individuals, and Punishment In Islamic Law, which advocates Shariah law, with its punishments of execution, amputation and stoning.

Syed recalled: ‘I saw books preaching brutal violence, sexism, homophobia, aggressive physical jihad, dismemberment and capital punishment implemented by the state. It reinforces the idea that what these militant groups are doing, what IS is doing, is legitimised by history.’

The Al-Manar mosque has hosted a series of visiting extremist preachers, including Muhammad Mustafa Al-Muqri, an Al Qaeda ally and ex- leader of Egyptian Islamic Jihad. The mosque has denied links with radicalism.

Until 2013, Hammuda was allowed to hold lunchtime sessions at Cathays High School in Cardiff, where Reyaad Khan was educated. Hammuda told his followers that music is manipulative, and along with ‘free mixing’ between men and women, is ‘not permitted in Islam’.

The revelations come as new Home Office figures show that no fewer than 50 young children were prevented by family court judges from being taken to Syria by their parents in 2015. The official report into the Government’s ‘Contest’ counter-terrorism strategy revealed that more than 150 attempted journeys were disrupted last year.

One of Britain’s leading moderate Islamic clerics, Imam Shahid Raza, said slavery violated the ‘dignity’ of human beings and only IS supporters would use the passage to claim it is permissible. He said: ‘There is a consensus among 99 per cent of Islamic scholars – it’s only a few radicals that do not agree with it – that slavery is against the laws of Islam, and the dignity of the human being.

‘What the Daesh [Islamic State] people have done to the Yazidis is completely unIslamic. Islam came into this world in an environment where slavery was practised, but over time, it banned it with laws and brought it to an end. The Hadith this man is quoting is good [authentic], but no scholar ever interprets it literally. Most scholars interpret it as the Prophet saying there will come a time when children will boss their parents so much that they appear to treat their parents like slaves.

‘That Hadith is interpreted as justifying sexual slavery only by Daesh types. You have to realise that slavery is both banned in Islam and also banned by the law of the land.’ According to prominent Muslim leaders in Cardiff, Hammuda has a reputation throughout Wales as an extremist, and is not welcome in most mosques in the region.

Mohammed Sarul Islam said: ‘Hammuda is a controversial person not just in Cardiff, but in Wales. Every mosque has tried to keep their distance from him. Everyone has cut off their ties to him. He is a radical.’

Last night, Hammuda, speaking on behalf of himself and the mosque, said he had always unequivocally condemned both the ideology and actions of ‘so-called Islamic State’.

He said: ‘I have lectured on this a number of times, including dedicating a number of Friday sermons to the condemnation of this evil phenomena. The undercover recording and quotations referred to seem to have been deliberately taken out of context to portray a religious perspective that I do not ascribe to.’

When he was confronted by Hardcash Productions and asked his relationship to Khan and the Muthana brothers, he replied: ‘It’s the same relationship of all the people here.’

Asked if he had radicalised them, he said: ‘I would have been locked away a long time ago if that was the situation.’

The following week, he spoke out against IS in a sermon and said in a statement: ‘I have always unequivocally condemned both the ideology and actions of the Islamic State.’