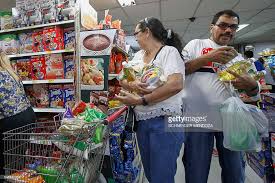 Tens of thousands of Venezuelans streamed across bridges into Colombia over the weekend to buy food and medicine
Share:

Tens of thousands of Venezuelans streamed across bridges into Colombia over the weekend after Venezuela briefly lifted a year-old border closure to allow people to buy food and medicine.

Colombian authorities said 35,000 Venezuelans made the trip Sunday during the 12-hour border opening.

The dramatic scenes of the elderly and mothers storming Colombian supermarkets were a stark reminder of how daily life has deteriorated for millions in Venezuela, where the economy has been in a freefall since the 2014 crash in oil prices. Many started waiting before dawn and came back weighed down with flour, cooking oil, diapers and other essentials that have become impossible to find amid 700 percent inflation and severe shortages.

The shortages look likely to worsen. Kimberly-Clark Corp. over the weekend announced it was suspending its factory and would stop selling in Venezuela staples like facial tissues and diapers. The government responded by threatening to seize the plant and take over production itself, but its track record for turning around once-thriving private businesses into socialist bulwarks is far from stellar.

Magola Penaranda, 60, said she and her two daughters and a grandchild lined up at 6 a.m. for the chance to cross into Colombia. She said she spent about $25 — nearly two months earnings at the minimum wage — buying items like toilet paper and soap that she hasn’t seen for months.

“Even if you have lots of money you can’t obtain rice,” Penaranda told The Associated Press back at her home in San Cristobal, Venezuela.

Venezuelan President Nicolas Maduro disputes blames the shortages on his opponents, who he accuses daily of trying to sow economic chaos to oust him from office. He dismissed as a “media show” scenes that went viral last week showing hundreds of desperate women pushing through a border checkpoint and into Colombia.

Authorities in Colombia, the country most exposed to Venezuela’s crisis, are taking the threat of a humanitarian crisis more seriously. Although estimates vary, as many as 5 million Colombians are believed to reside in Venezuela, many driven from their home by the country’s long-running armed conflict.

Before the border was shut in August 2015, more than 100,000 people daily used the two main crossings, according to the Venezuelan government. That has shrunk to just 3,000 a day, , many of them students and sick people given special day passes, nonprofit groups working in the region say.

“We have to help the Venezuelan people and that’s what we’re going to do,” Colombian Foreign Minister Maria Angelica Holguin said Monday, recalling the warm welcome millions of Colombians received for decades in Venezuela.

It’s precisely those migrants, many of whom have lived for decades in Venezuela, that represent the biggest spillover risk if the Venezuelan crisis worsens. Colombia already had a small taste of what’s at stake when the government hastily had to set up tent cities for thousands of its citizens expelled by Maduro when he closed the 1,378-mile (2,219 kilometer) border to clamp down on criminal gangs smuggling over the border goods and gasoline sold at subsidized prices in Venezuela.

Luiz Eladio Perez, who served as Colombia’s ambassador to Venezuela until 2015, said there’s little preventing as many as 500,000 Colombians plus untold masses of Venezuelans from seeking refuge across the border. If such an exodus does occur, he fears it will overwhelm the Colombian government’s ability to respond in a notoriously dangerous and neglected border region.

“If there’s no food for Venezuelans, than there will be even less for foreigners,” said Perez.