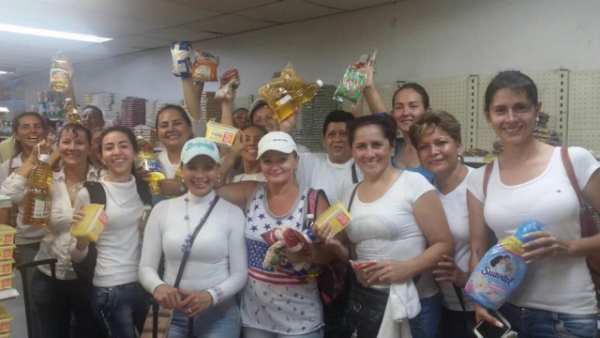 Venezuelan women with their shopping. Photo sent by an Observer.
Share:
Nearly 500 Venezuelan women defied the authorities of their country on Tuesday and stormed the border with Colombia, which has been closed for almost a year. Their sole intent: to buy the food and medicines that can no longer be found in Venezuela due to life-threatening shortages.

They queue for hours outside stores, pay extravagant prices for staple foods, or even scavenge in rubbish bins: Venezuelans have been living through a severe economic crisis for a little over a year, with consequent shortages in foodstuffs and medicines.

A full 80 percent of essential products are all but impossible to find, as our Observer explains below. The shortages have also spurred an explosion in prices, making what little food is available far too expensive for most.

So, in order to buy food and supplies, several hundred women from the city of Ureña, in Táchira state in the Venezuelan west, decided to force their way across the Colombian border. In August 2015, Venezuelan president Nicolás Maduro closed about 100 kilometres of this border, between Ureña and San Antonio del Táchira, after an ambush in which three Venezuelan soldiers and one civilian were injured. Since then, the bridge separating Ureña from its neighbouring Colombian city, Cúcuta, has been under 24-hour surveillance by the National Guard, which has prevented anyone from entering Colombia.

Our Observer Lucero Valero is 34, works as an accountant and lives in Ureña. On Tuesday, she managed to force her way through the security cordon to do her shopping on the Colombian side of the border.

“The crisis has been getting worse for several months now. Most basic products are out of stock. As soon as a store gets resupplied, you have to queue outside for four or five hours.

So several of us Ureña women organized ourselves, through Facebook groups and WhatsApp, to go into Colombia together. We decided to dress all in white, so that our movement would have more impact. The fact that we were all women also helped in getting the word out about what we were doing, and helped avoid any violence from the police – law enforcement attacks women much less.

It wasn’t easy to cross the security cordon. We had to elbow our way through until the soldiers gave in. As expected, though, they weren’t violent toward us. We were about 500 women, and almost all of us managed to pass.

We bought rice, olive oil, sugar, milk, flour, and then we came back. Milk is really the biggest problem in Venezuela. We don’t have any to give our children anymore! Incidentally, in Cúcuta, standard products are almost two times less expensive than in Venezuela. That’s why we’re asking for the border to be reopened: we need to be able to Colombia so that we don’t die of hunger.

José Rozo is the former president of the chamber of commerce in San Antonio del Táchira, Ureña’s neighbouring city. According to him, the border closure has worsened the economic crisis in Táchira state, which borders Colombia.

It’s been ten months now that the border’s been closed. This has caused the closure of 70 percent of the region’s stores. The closing of the border was supposed to help end smuggling across the border between the two countries, but it’s only gotten worse as a result of the economic difficulties.

Extortion is happening all the time now. Just last week, a car parts business shut down after a series of threats by armed groups. Almost 150 people worked there, and today they’re unemployed.

Given the shortages, other businesses are closing their doors because it’s too hard to get supplies of raw materials. At one of the region’s clothing manufacturers, production is 15 times lower today than it was before the closing of the border.

Our country is sinking deeper and deeper into what must now be called a humanitarian crisis – even basic medicines aren’t available anymore. In the course of just one month in our state, two sick patients committed suicide at the central hospital in San Cristóbal [the capital of Táchira state], because there was no medicine with which to treat them, according to information from the mayor’s office.”

Venezuela, an oil-producing nation, has been plunged into an unprecedented crisis by the drop in oil prices. In 2015, inflation reached 180 percent, one of the highest rates in the world, and GDP fell by a full 5.7 percent, the second annual decline in two years.
France24 Observers