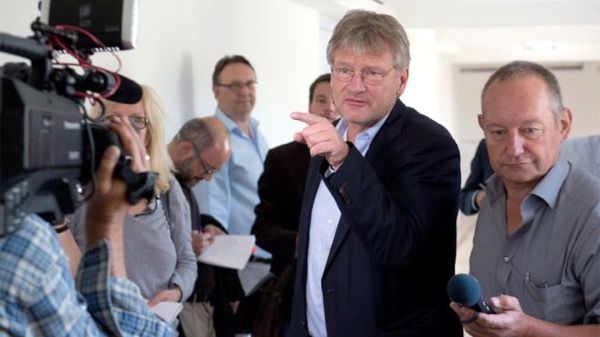 Joerg Meuthen (C) said the split was “a painful but necessary step”
Share:
The right-wing Alternative for Germany (AfD) party, which is surging in opinion polls, has been split by a row over anti-Semitism prompted by the views of one of its lawmakers.

Thirteen of AfD’s lawmakers in a state parliament have formed a new bloc, Alternative for Baden-Wuerttemberg.

The dispute erupted over statements by one legislator, who had suggested the Holocaust was given too much attention.

As other MPs were unable to eject him from the party, they formed their own.

The row has also engulfed the AfD’s national leadership. Its Eurosceptic, anti-migrant message has propelled it to third place in opinion polls, behind the two parties in Germany’s governing coalition.

Wolfgang Gedeon was one of 23 AfD representatives elected to Baden-Wuerttemberg’s state parliament in March, after the party took 15.1% of the vote.

In written comments, he had referred to the Holocaust as “certain misdeeds”. He has also suggested Holocaust denial – illegal in Germany – was legitimate.

The leader of the AfD in Baden-Wuerttemberg, Joerg Meuthen, who is also the party’s co-leader nationally, had tried to get Mr Gedeon expelled from the AfD’s fraction, but failed to get the two-thirds majority of his MPs required.

He and the 12 AfD representatives who had voted with him resigned en masse on Tuesday.

The row seems to have driven a further wedge between Mr Meuthen and his national co-chair, Frauke Petry.

Ms Petry travelled unexpectedly to the Baden-Wuerttemberg state capital, Stuttgart, in an apparent effort to resolve the situation.

Despite this, and Mr Gedeon’s eventual resignation, Mr Meuthen announced the new grouping and told German media he “didn’t know why Ms Petry was there”.

Alternative for Germany has next year’s general election in its sights. Polls suggest it could garner around 15% of the national vote. Its anti-Islam, pro-referendum and anti-European federalism platforms appeal to disenchanted German voters, worried by the EU’s initial inability to deal with last summer’s refugee crisis.

Anti-Semitism does not appeal to them, however. It’s worth noting that AfD has reportedly dropped a proposal to ban circumcision from its recently published manifesto.

The AfD was emboldened by the Brexit vote in the UK; one of its leaders was said to have wept tears of joy at the result. But commentators point out that the political and economic fallout from Brexit may actually increase support for mainstream parties, which are scrambling to promise reforms to a future EU without the UK.

And Baden-Wuerttemberg, so recently a symbol of the AfD’s electoral success, now represents the persistent lack of coherence which has plagued the party from infancy. That, and an ongoing power struggle at the very top of the party, may do significant damage.

The AfD came under fire earlier this year when it said that there was “no place for Islam” in Germany in its manifesto. This year, attacks with a far-right motivation have reached a 15-year high, according to the German government.

But since its founding in 2013, the party has been repeatedly shaken by internal rows between its more moderate and extreme factions.

Mr Gedeon’s views on the Holocaust were expressed some years ago in a three-volume work on Christian culture in the West.

The row has provoked further recriminations, with the party’s national Vice-Chair Alexander Gauland criticising Ms Petry’s handling of the affair.

Mr Gedeon’s behaviour had damaged the AfD, he told ZDF TV, suggesting the “ripcord” should have been pulled far earlier.

“That’s why this chaos has arisen.”

Mr Lucke, seen as a moderate, quit the party in early July 2015, arguing it was becoming increasingly xenophobic
Right-winger Frauke Petry replaced him as party leader

It became the first anti-euro party to win seats in a German regional parliament, receiving almost 10% of the vote in the eastern German state of Saxony in 2014, and went on to win seats in four other states’ parliaments in 2014 and 2015

The party had seven MEPs elected in the 2014 European elections (including Mr Lucke), but only two remain party members

AfD was part of the European Conservatives and Reformists Group, like the UK’s Conservatives, but one of its two MEPs has been expelled from the group over comments on shooting refugees

At the start of May, AfD members adopted an explicitly anti-Islam policy, declaring that the religion was “not part of Germany” and calling for a ban on minarets, the call to prayer and the full-face veil.