Turks hit back at Erdogan plan to give Syrians citizenship 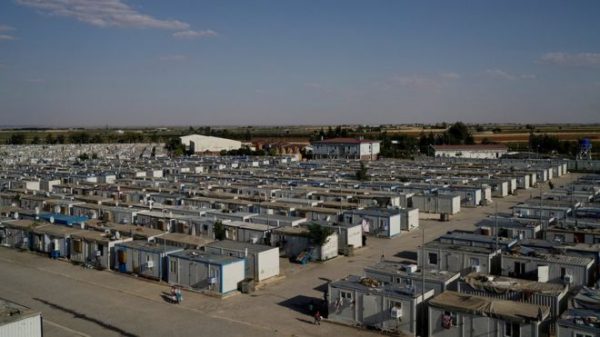 Most Syrian refugees in Turkey are covered by the Turkish government’s temporary protection scheme
Share:

“I am sorry but I don’t want unregulated Syrian immigrants in my country. Turkey is not a refugee camp,”

That view from one Turkish Twitter user summed up the response of many to a remark on Sunday by President Recep Tayyip Erdogan that Syrian refugees living in Turkey could eventually be granted citizenship.

Mr Erdogan didn’t explain how this would actually happen, whether all the Syrians would be eligible to apply for citizenship or on what criteria. It was all left rather vague. But still his pledge sparked huge reaction on social media.

A hashtag targeting Syrian migrants became one of the trending topics worldwide on Twitter: #UlkemdeSuriyeliIstemiyorum means simply “I don’t want Syrians in my country”.

“Turkey has not implemented a policy of integration up until now. If we soon grant citizenship and if all this procedure is not well managed, this could lead to serious tensions within communities,” he warns.

Turkey has adopted an open-door policy towards Syrians since the uprising began five years ago in their home country. Currently, there are more than 2.7 million Syrians living in Turkey.

They are not granted refugee status, but legally are regarded as “guests” under a temporary protection regime provided by the 1951 Geneva Convention.

Around 10% of Syrian migrants in Turkey live in over 20 refugee camps built across Turkey. The rest reside in urban cities, frequently in dire conditions.

“This will have a psychological impact on the Syrians in Turkey. I believe they will try more to abide by the rules and stay away from crime in order to earn the right to apply for citizenship,” says İbrahim Kavlak from the Association for Solidarity with Asylum Seekers and Migrants.

“I think this would also decrease the temptation amongst the migrants to travel to Europe,” he argues.

The European Union and Turkey reached a deal in March this year to stem the flow of migrants to Europe.

Under that deal, Brussels pledged to give €6bn ($6.7bn; £5bn) in aid to Ankara to increase the living standards of Syrian migrants in Turkey.

“If Syrians are granted citizenship, why would Europe give financial support to Turkey?” asks Murat Erdogan.

He believes such a move would deter Brussels from lifting visa restrictions against Turkish citizens – one of the major demands of Ankara under the migrant deal.

“If we give each and every Syrian Turkish passports and say ‘Now you can travel to Europe’, how can Europeans manage that?”

Polls in Turkey suggest that less than 10% of the Turkish public supports granting citizenship to Syrian migrants, although they have been overwhelmingly welcoming towards Syrians.

Opposition parties argue President Erdogan is actually playing politics, By pledging citizenship to Syrians, they argue, he wants to grow his support base before the next elections or before a referendum where he might seek further constitutional powers.

More than 1.5 million Syrians will be eligible to vote in the next elections, if granted citizenship.

“The governing party clearly showed that they’re not thinking about the future of these people, but rather their own political gain,” said Veli Agbaba, an opposition MP.

The leader of the MHP nationalist opposition party, Devlet Bahceli, went even further to suggest that giving citizenship to Syrians could cause ethnic tensions and chaos in Turkey.

“Syrian migrants do not speak Turkish. They have poor education. Nearly half of them do not even know how to read or write,” says Murat Erdogan.

“There is over 10% unemployment in Turkey already. Competing for jobs will cause complications with other ethnic or religious groups. I’m afraid, the pledge of citizenship could also increase the flow of migrants to Turkey too,” he argues.

For Ribal Azzin, a Syrian who settled in Turkey six months ago after fleeing the fighting in Aleppo, President Erdogan’s pledge is promising.

“Life for Syrian people is already very difficult. Not only Syrians with some money but every one of us should have residency and passport. The gates shouldn’t be closed to us,” he says.
BBC