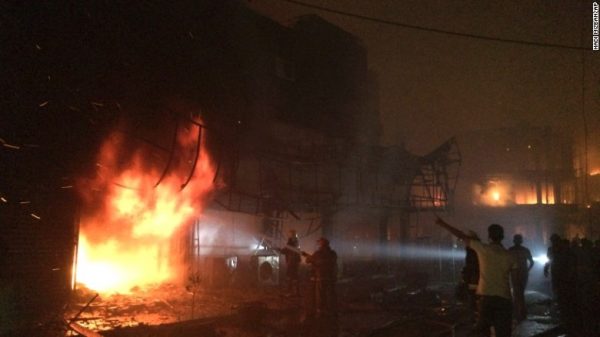 CNN update: The death toll from Saturday’s suicide bombing in Baghdad has risen to 200, the deputy head of the security committee of the Baghdad Provincial Council, Mohamed al-Rubaye‎, said in a televised phone interview Monday.

Here is the previous report by CNN on the deadliest single attack in the war-weary country in years.

Baghdad: A suicide truck bomb ripped through a busy shopping district in Baghdad over the weekend, killing more than 100 in what was the deadliest single attack in the war-weary country in years.

The brazen Saturday night attack in the heart of the packed Karrada neighborhood killed at least 125 people, including 25 children and 20 women.

Families had been gathering hours after they broke the fast for the holy Muslim month of Ramadan and prepared for Eid al-Fitr — the day that marks the end of the holiday this week.

As people congregated, shopped and watched soccer matches, the bomb-laden truck plowed into a building housing a coffee shop, stores and a gym. Firefighters rescued wounded and trapped people in adjacent buildings.

ISIS claimed responsibility for the attack. It was the latest in a string of assaults during Ramadan, a period of fasting and prayer for Muslims and also a time when jihadists launch operations against those they regard as their enemies.
At least 147 people were wounded.

ISIS promised an uptick in terror attacks during Ramadan. The Baghdad assault came just days after massacres at a cafe in Dhaka, Bangladesh, the Ataturk International Airport in Istanbul, Turkey, and security targets in Yemen. There have also been recent suicide attacks in Jordan at a border crossing near Syria, and suicide attacks in a Christian area of northern Lebanon.

Last month, a gunman shot up a nightclub in Orlando, Florida, killing 49 people before he was killed, and an attacker killed a police commander and his partner in France.

Omar Mateen, the killer in Orlando, and the attacker in France both pledged allegiance to ISIS.

A second bomb exploded Sunday at an outdoor market in the Shaab neighborhood of southeastern Baghdad, killing one person and wounding five others, police said.

Both Baghdad strikes are a sign of the Sunni-Shiite tension in the Muslim world. Sunni-dominated ISIS claimed it was targeting Shiite neighborhoods. Karrada and Shaab are predominately Shiite.

“These acts of mass murder are yet another example of Daesh’s contempt for human life,” said State Department spokesman John Kirby, using another term for ISIS. “From Baghdad to Istanbul, Brussels, Dhaka, and Paris, Daesh terrorists murder the innocent to attract attention and recruits. They will not succeed.”

Kirby was also making reference to the attacks last November in Paris that killed 130 people and the attacks in Brussels that left more than 30 dead.

“We’ve had it with the Iraqi government and politicians. They can’t continue blaming Daesh and other terrorist groups. We need a solution,” he said. “I lost several friends myself, some are still missing,” he said, sobbing.

The anger of residents manifested itself when Iraqi Prime Minister Haider al-Abadi and other officials attempted to survey the bomb damage.

Amateur videos posted on social media showed residents throwing objects at a convoy carrying al-Abadi in Karrada. The videos showed protesters yelling “thief!” and “get out!”

In a statement, al-Abadi said he understands the reaction in “that moment of grief” by the residents who threw objects at his convoy.

He said he came to Karrada to console families and “share their sorrow in this painful tragedy that happened.” He said ISIS tried to hijack the joy that Iraqis felt over recent victories against ISIS in Falluja.

As for Baghdad, it has witnessed a surge in the number of car bomb attacks in recent weeks, with ISIS claiming responsibility for many of them.

One of the worst incidents occurred in Baghdad’s Sadr City neighborhood May 11, when a car packed with explosives detonated, killing at least 64 people and wounding 87, according to security officials.

A week later, three more explosions were set off. Sadr City was hit again — another 24 people were killed and 71 were wounded.
The other two explosions were in the Shaab neighborhood adn killed at least 19 people and wounded another 44.

“This is a cowardly and heinous act of unparalleled proportions, to target peaceful civilians in the closing days of the holy month of Ramadan, including shoppers preparing” for the Eid holiday, said Jan Kubis, the United Nations special representative for Iraq.

The White House issued a statement saying, “These attacks only strengthen our resolve to support Iraqi security forces as they continue to take back territory from ISIL, just as we continue to intensify our efforts to root out ISIL’s terrorist network and leaders.” ISIL is also another name for ISIS.

UNICEF reacted to the death of 25 children in the attack.
“The killing and maiming of children is a grave violation under international humanitarian law,” the group said in a statement. “As violence across Iraq intensifies, children continue to pay the heaviest price.”
Bombing comes after Iraqi gains against ISIS

This flurry of ISIS strikes during Ramadan comes as the United States says the group is losing ground in the warfare across Syria and Iraq.

Iraqi forces announced last week they have seized the city of Falluja, 40 miles west of Baghdad, from ISIS. At the time, authorities assured Baghdad residents that the bombings would stop.

Many of the car bombers and suicide bombers who have plagued the capital for years are from Falluja, about an hour away.

“Obviously this will reignite the anger of ordinary people who say we can’t even go out at night and enjoy life in our city,” said CNN Senior International Correspondent Ben Wedeman.

Iraqi forces, encouraged by their triumph, are turning their attention to Mosul, where they and Kurdish forces plan to wrest control of Iraq’s second-largest city in the north. Mosul has been under ISIS control since 2014.

Cedric Leighton, a CNN military analyst and retired Air Force colonel, thinks the attacks will worsen and said that is ISIS’ game plan, to generate instability.

“They are trying to create enough chaos in Iraq itself so that the Iraqi forces will find it very difficult to actually take advantage of the forward momentum they have achieved because of their victory in Falluja and that is a very serious issue that the al-Abadi administration is going to have to address.”

It’s hard to say “when and where they are going to strike,” he said of ISIS.

“This is a very, very difficult time. It is a very risky time, just because the political fissures are so great within Iraq that they are so easily exploitable by ISIS and its fellow travelers.”

Such attacks, like the one in Baghdad will serve to drive a wedge between the government and the people, in particular the Shiites.
“The wedge was already there and its fairly easy for them to exploit this,” he said.

After the Karrada attack, al-Abadi issued a statement ordering all bomb detector devices pulled from security checkpoints. He ordered the Interior Ministry to reopen a probe into corrupt deals to purchase such devices.

This occurred amid fears that some detectors don’t work.

Six years ago, the Iraqi government accused a manufacturer of supplying the country with some fake bomb detectors and said Tuesday it plans to sue the company.

Government spokesman Ali al-Dabbagh at the time said that three Iraqi investigations into the devices determined most of the bomb detectors are working, although some are fake and ineffective. He did not name the detectors in his statement or explain the investigations.

The alleged fakes have been removed from Iraqi streets and have been replaced by functioning ones, al-Dabbagh had said.