Hezbollah warns on “Jerusalem day” that Israel should disappear 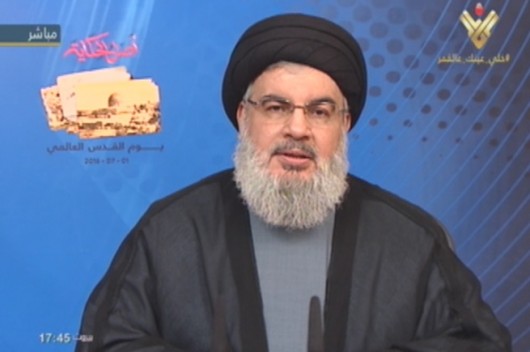 In a televised speech marking Jerusalem ( Quds) day he said : “The land of Palestine from the sea to the river was seized and and stolen and the fact that this happened many years ago does not entitle Israel to it . This entity ( of Israel ) should not be recognized and should disappear from existence and the stolen land should be returned to its rightful owners , the Palestinians . Israel is the wrong possessor of the land of Palestine , anything else said on this issue is injustice , falsehood and misleading. ”

He warned Israel that his group knows more about the Jewish State than any other Arab power ever has known.

He said he was not impressed by Israeli warnings not to test the country’s readiness along its northern border.

“The threats we heard are not new, but what is new is that Israel speaks about this a lot. The threat to destroy us and kill us is not new,” Nasrallah said.

He boasted that Hezbollah possesses significant intelligence on Israel.

“The important thing is the amount of information we have about you — on your power plants, your petrochemical plants, your nuclear sites, your important economic sites, your strengths and weaknesses and your resources in all areas,” Nasrallah said while admitting that Israel has “strong intelligence mechanisms “, adding , but you also had a lot of intelligence in the 2006 war and you were still surprised” by Hezbollah’s capabilities .

In a related development IRGC Brig. Gen. Hossein Salami criticized Israel during a speech before Friday prayers in Tehran, stating that “in Lebanon alone, there are 100,000 missiles ready to be launched” toward Israel.

Iranian President Hassan Rouhani vowed that Palestine “will never be alone” despite the emergence of other regional conflicts while speaking on the sidelines of Quds Day demonstrations. Rouhani stated, “We have been distanced from the path of freedom for Palestine, under the shadow of disunity in the Islamic world and the presence of terrorist takfiri groups in the region… The [Iranian] people will stand with the world’s oppressed and next to the oppressed people of Palestine.” He added that the “global arrogance” — a term referring to the U.S. and its allies — does not want the Middle East to have “security and stability.”

Separately, Foreign Minister Mohammad Javad Zarif called Israel and terrorist groups a “single danger” and stated, “The takfiris and their supporters have forgotten the reality of Israel’s hostility with the Muslim world, ” Fars News Agency reported.

IRGC issued a statement on the occasion of International Quds Day where it envisages a liberated Quds after 25 years when no Israel would be present on the world map.

Addressing the recent 8 suicide bombings in the border town of al Qaa Nasrallah assured the Lebanese that the security in Lebanon is under control.
Addressing Hezbollah’s critics who argue that the party’s involvement in the Syrian war has led to terrorist attacks inside Lebanon, Nasrallah noted that suspected IS militants have staged a spectacular attack on Istanbul’s airport in recent days although Turkey “has not fought the I.S.”

But according to analysts Hezbollah did nothing to stop the 8 suicide bombers to come to al Qaa. The residents of the town who were hailed as heroes discovered the first batch of 4 suicide bombers at 4 am and fired at them . The terrorists were reportedly scared and blew themselves up . The same happened with the 4 other suicide bombers the same day in the afternoon. The analysts stress that had not been for the Security forces and the Army many of the terrorists that were detained at the border would have ended up bombing Hezbollah strongholds in the Beqaa and Beirut .