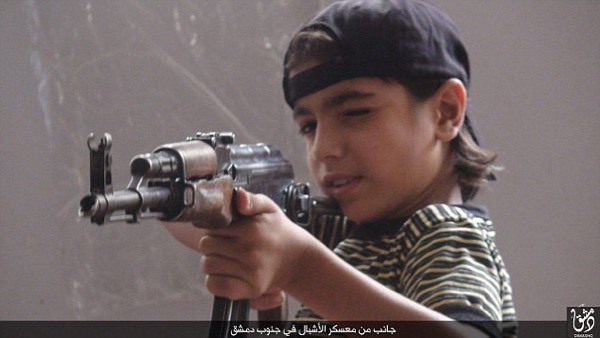 Abu al-Baraa, 15, spends his days sitting in a gilt chair in a house abandoned by a family who fled the country. Once in awhile, holding a sniper rifle, he stands on the chair to survey a broad field, just nine miles away from government forces.

The teenage soldier left school more than two years ago, joining a rebel militia and eventually becoming a sniper at this intersection on the border between opposition and government-controlled territories.

“I sit here to protect myself and my family,” he said. “Everyone else fled to Europe and Turkey, and they left us here without protection.”

Militarizing children has become common in the Syrian war, with all sides guilty of what is considered a war crime in international law.

The Syrian Independent Media Group interviewed soldiers ranging from 14 to 17 years of age, most belonging to branches of the Free Syrian Army in Daraa, Homs and Idlib. The group was unable to speak with child soldiers fighting for al-Nusra Front or the Islamic State, which do not permit such interviews – speaking to them without permission would have put the children at risk.

Many FSA leaders said children are not allowed to be involved in combat in any way, but its fighters said that children were joining opposition groups on their own, often following their older brothers and cousins into battle.

“The headquarters are filling up in the villages – it is very easy for a teenager to go with those he knows, or by himself, to volunteer and become a fighter,” said Husam Abu al-Farouq, a fighter in Daraa. “Most of the time, there is no arrangement with the parents.”

Abu Yahya, a leader of Jaish al-Sham, a coalition of Islamist and Salafist units, in Idlib, views it as a simple matter: “There are no schools or anything like that around here … They come in and ask us to make them soldiers, and we rely on children who are able to carry weapons, starting at the age of 15. There are parents who do not want their children joining, but if we don’t take them, some other group will.”

Mahmoud al-Abbas, an 18-year-old Idlib native who enlisted two years ago with Ahrar al-Sham, another powerful coalition of rebel militias, recalled taking the initiative to join the group.

“I asked where I could find the headquarters of the fighting groups for the opposition,” he said. “My mother was very afraid, but my brothers encouraged me to fight because they are also fighters. Of course, there are financial reasons behind why I chose to fight, plus there are no schools to study in, there is no work and we have to defend ourselves and our parents.”

Child soldiers fighting on the front line in Idlib for the FSA said they did not have steady wages, receiving around $30-35 from their leaders only once in awhile. Farouq said children received monthly payments, which their families depended upon for survival.

As for al-Nusra Front, many civilians in rural Idlib say the group’s vehicles are constantly patrolling the area, trying to enlist children. In some parts of Idlib controlled by al-Nusra, children attend religious schools that have been opened as an alternative to public schools. There, they receive not only religious education, but also basic weapons instruction.

The situation is similar with children fighting with IS, which militarizes children through extremist religious teachings. According to Aktham Elwani, a journalist specializing in jihadist groups, teenagers in areas controlled by the IS are “brainwashed by constant implanting of jihadist ideology.”

“The parents do not dare prevent their children from fighting,” he added, “because whoever refuses is either sent to jail or killed, with the accusation being treason.”

Children fighting for IS are paid around $65 per month, and their parents receive a “health basket” with food for a few days.

In northeastern Syria, the Kurdish People’s Protection Units are also known to militarize local youth, although they claim to keep them far away from the front lines.

But Human Rights Watch has found that the YPG is militarizing both boys and girls in their police and militia. In 2014, the YPG demobilized 149 children after signing a deed of commitment protecting children in armed conflict at the behest of nonprofit organization Geneva Call. However, it retained some teenagers who still fight with them to this day.

Child soldiers fighting for the Syrian government were the most difficult to reach. Although the government ratified the U.N.’s optional protocol for protecting children’s rights in 2003, this does not cover groups assisting the Syrian army, including the notorious shabiha – mostly Alawite groups of armed militias that support Bashar al-Assad’s rule.

According to the U.K.-based Syrian Observatory for Human Rights, in 2012, the National Defense Forces – a pro-government militia that serves as a volunteer reserve component of the Syrian army – was actually training children. Still, no national organization has been able definitively to accuse the Syrian government of militarizing children.

“The officers have noticed that they are much more active and effective than older prisoners, and they are also in much better shape,” he said. “They do everything they can to complete their mission, no matter how hard it is.”

The Syrian Independent Media Group also acquired a video of Adonis, a 17-year-old boy killed in February while fighting for the Syrian Social Nationalist Party branch in rural Latakia, a coastal area to the west of the country controlled by the Syrian army.

While Adonis was not used to being filmed, he said a “brave” man was supposed to leave a video will for his parents to watch after his death.

While enlisted young people may initially be kept away from fighting, delegated to cooking or cleaning duties, they are eventually trained and sent to fight, some even participating in suicide missions. In January 2015, IS published photos of Abu al- Hassan al-Shami, a boy believed to be around 14, preparing to carry out a suicide bombing in Iraq.

In 2014, the United Nations documented 278 cases of child soldiers as young as 8. It also found that 77 percent of child fighters engaged in direct combat.

According to the Violation Documentation Center in Syria, at least 305 child soldiers have been killed in Syria’s war, with the first deaths occurring in September 2011, when government forces detained a pair of 16-year-old brothers in Halfaya. The center’s former manager, Bassam al-Ahmad, said the actual number of child soldiers killed in the war was “much higher” than the number the organization was able to record.

The process of rehabilitating militarized youth is also a struggle, according to Alaa Thatha, a psychologist at a children’s organization in Syria, adding that these children need proper schools to continue their education, and alternative ways to earn a living for themselves and their families: “It’s easy to save a child from war, but it’s not easy to take the war out of him.”