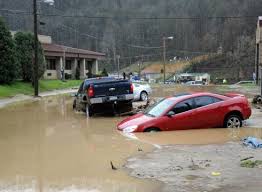 At least 23 people have been killed after powerful storms swamped West Virginiaon Thursday night, forcing high water rescues across the state and leaving thousands of customers without power through Friday evening, officials said.

The threat of pop-up showers and overflowing rivers was still a concern Friday, and Gov. Earl Ray Tomblin said that search and rescue efforts remained a priority to help people trapped in flooded-out homes and cars. He said 200 National Guard members have been deployed in eight counties with about 300 more authorized to help with ongoing relief.

The storm system dumped 9 inches of rain on parts of West Virginia and trapped 500 people in a shopping center for more than 24 hours after a bridge washed out. Crews completed a temporary roadway Friday night, NBC affiliated WSAZ reported. Dozens of other people had to be plucked off rooftops or rescued as waters quickly rose during the deluge.

The heavy rainfall over six to eight hours prompted the National Weather Service to call it a “one-in-a-thousand-year event.”

“Please continue to work together and support each other as West Virginians always do,” Tomblin pleaded at a news conference where he announced the growing death toll and said about 100 homes have been damaged.

West Virginia’s Division of Homeland Security and Emergency Management announced the death toll had climbed from four people early Friday to at least 23 by Friday night.

One search for a missing 4-year-old ended in heartbreak after officials said Friday they found his body. The boy — Edward McMillion — had vanished in the rising waters in Ravenswood, Jackson County, which sits along the Ohio River on the Ohio border.

Officials did not immediately identify the victims, although local reports said one of those killed in Ohio County was an 8-year-old who had slipped into a creek and was carried away. He later died at a hospital, The Intelligencer reported.

Meanwhile, an elderly man was killed in the floodwaters in Kanawha County, while a woman there was washed away in her vehicle in another incident, NBC affiliate WSAZ reported.

In one dramatic scene in White Sulphur Springs in the state’s south, where up to 10 inches of rain fell Thursday, the flood waters pushed a burning home down the Howard Creek.

Forty-four counties, primarily in the southeastern part of the state, were under a state of emergency Thursday night because of flood waters, emergency officials said. Electric utilities initially reported that almost 500,000 customers were without power, although that number dropped to 60,000 by Friday afternoon.

Rivers around the state were reaching historic levels Friday, officials said.
In Clay County, northeast of Charleston, the Elk River rose to over 33 feet, breaking the previous record of 32 feet set in 1888.

Kanawha County was especially inundated, and dozens of water rescues were under way in and around Clendenin, where numerous roads were closed by racing flood waters, WSAZ said.

“There’s been a ton of areas that have been hit hard” by as much as 7 inches of rain, said Danielle Banks, a meteorologist for The Weather Channel.

Mark Burgess, wife Lisa and parents-in-law Bill and Peggy Lucas were occupying the second floor of their home in Elkview when the waters started rising at around 1:30 am ET.

Mark Burgess told NBC News on Friday morning there was about four feet of water, “but it has stopped going up now.”

He said it was the first time that residents have witnessed such flooding. “My mother-in-law has lived here for 80 years, and this never happened before,” he said.

“There is nothing you can do,” he added. “We can call for help if it’s too deep, but it’s OK right now.”

Charitable organization Save the Children said it was reaching out to families “to determine what the most urgent needs are to protect children’s safety and well-being,” said Anna Hardway, Save the Children’s director of programs in West Virginia. “We know many children are displaced and have lost belongings and possibly homes, and can be very vulnerable after a disaster like this.”

“Many of the families we serve don’t have the resources to quickly bounce back and we want to make sure we can help them protect their children,” she said.

In neighboring Virginia, thousands were also without power, utilities said.

Record floods were forecast overnight Thursday along the Jackson River in the areas of Covington and Alleghany County. The state Department of Emergency Management urged residents of those areas to be ready to evacuate on short notice.

The fierce rain was caused by a “derecho” weather system that spun off at least eight confirmed tornadoes Wednesday in Ohio and northern Illinois on Wednesday evening and Thursday morning, the NWS said.