Sanders says will vote for Clinton, “will do everything to defeat Trump” 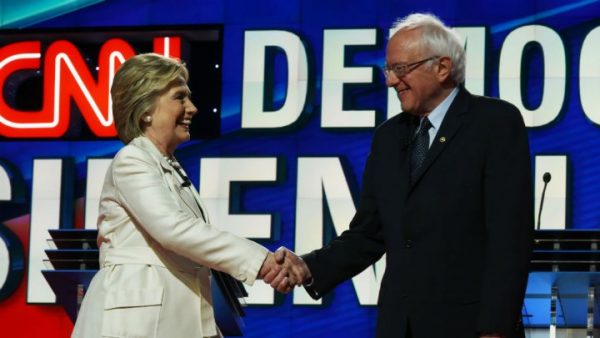 Bernie Sanders said Friday he will vote for Hillary Clinton in the US presidential election in November, bowing to his former rival for the White House but stopping short of a full endorsement.

Asked on MSNBC whether he would cast his ballot for Clinton, the Vermont senator who waged a surprisingly tough campaign during the primaries said, “Yes.”

“I think the issue right here is I’m gonna do everything I can to defeat Donald Trump,” Sanders said, referring to the billionaire businessman who is the presumptive Republican presidential nominee.

“I think Trump, in so many ways, will be a disaster for this country if he were to be elected president. We do not need a president whose cornerstone of his campaign is bigotry,” Sanders told MSNBC.

Sanders has resisted dropping out of the race even though all the primaries are over and Clinton has reached the delegate threshold she needs to secure the nomination formally at next month’s convention in Philadelphia.

Sanders has said he is still in the race because he wants to exert influence on Clinton and push her policy positions more to the left.

Sanders, who describes himself as a democratic socialist, did surprisingly well during the primary season by winning over younger voters in particular with his pledges to overhaul what he calls a tainted political and economic system and work to end income inequality in America.