Countries that could be next after Britain voted to leave the E.U. 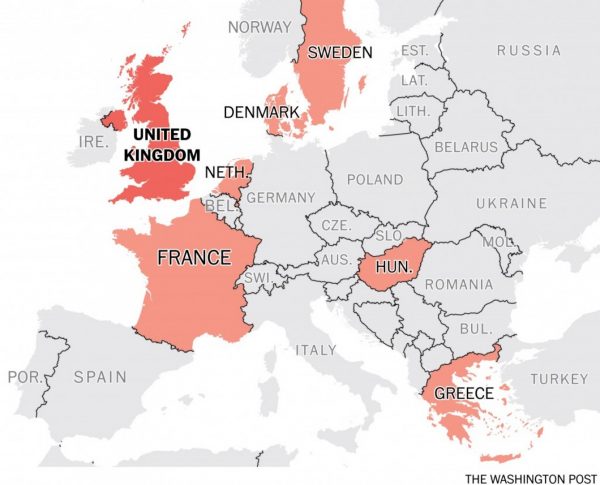 There was no lack of doomsday rhetoric before Britain’s referendum on E.U. membership. European Council President Donald Tusk warned that Britain leaving the European Union could seriously threaten “Western political civilization.”
Now, those fears have been stunningly amplified by the decision of British voters to break away. Predictions that the E.U. could break apart might be a bit far-fetched, but there certainly are other countries where demands for similar referendums could gain momentum.

The country views itself as the Scandinavian equivalent of Britain: It refused to introduce the euro as a currency. And in terms of E.U. politics, Britain and Sweden agree on 90 percent of all issues.

Hence, a Brexit would raise particular worries in Sweden. The country accepted hundreds of thousands of refugees last year but has struggled to integrate some of them. Consequently, Sweden’s far right has gained momentum in a development that has reminded some of the rise of pro-Brexit U.K. Independence Party (UKIP) in Britain.

Most Swedes still have a positive impression of the E.U. However, this could potentially change if Britain voted “out.” In that case, one of the central questions would be whether E.U. leaders will try to strengthen cohesion by deepening cooperation and focusing on core members, or whether they will loosen the union to allow national governments to have a bigger say.

Swedes probably would start to have bigger doubts about whether their voice as a smaller country without the euro would still be heard in Brussels, should the E.U. continue its integration process. Denmark held a referendum last December, although with a much more limited impact: Danes decided against handing over more powers to the E.U.

That alone is not enough to predict whether Danes would really want to vote “out”: In fact, most citizens of E.U. member states think that Brussels should not become more powerful than it is, according to a recent Pew Research Center survey.

As in Sweden’s case, two arguments would be particularly likely to influence voter behavior. First, many Danes fear that more immigration or an influx of refugees could threaten the small nation’s welfare system. Second, Denmark has so far relied on Britain as a strong ally in negotiations with the E.U. as both countries have had similar policy stances.

“Without Britain, Denmark won’t have the locomotive to tow Danish interests,” political scientist Marlene Wind of the University of Copenhagen was quoted as saying by Bloomberg News.

The Greek government’s debt crisis has mostly disappeared from the public debate and the headlines — but it will return sooner rather than later.

Greek newspaper Kathimerini fears that this ongoing crisis combined with a Brexit could ultimately become a threat to Greece’s E.U. membership status.

“Athens’s main concern should be that a victory for Leave will weaken the eurozone’s resolve to bolster Greece’s position within the single currency, which could require more tools and a greater level of integration than currently exists,” the paper argued.

“In many ways, Greece depends on greater burden sharing in a closer-integrated eurozone. But this would likely remain off the cards after Brexit,” Wolfango Piccoli, research director of political risk consulting company Teneo Intelligence, was quoted as saying by the paper.

Hence, what Greece fears most is not an anti-E.U. referendum influenced by right-wing parties, but rather the E.U. pushing Greece out in order to save cohesion among the remaining members.

The Netherlands
Dutch newspaper Algemeen Dagblad had a clear message for the British ahead of Thursday’s referendum. “Don’t leave me this way,” a cover story’s headline read.

But this may not reflect how most Dutch think about the E.U.

Geert Wilders, the head of a right-wing populist party, has supported a Brexit and hopes for a similar referendum to take place in the Netherlands. “If we want to survive as a nation, we have to stop immigration and stop Islamization,” Wilders told the BBC in a recent interview.

“We cannot do that inside the European Union,” said Wilders — who is is currently leading in the country’s polls.

Hungarian Prime Minister Viktor Orban is not known to be a particular friend of the E.U., either. In fact, he has gained quite the opposite reputation. Last May, European Commission head Jean-Claude Juncker greeted Orban, saying, “Hello, dictator,” while TV cameras were recording the awkward incident.

Despite disagreements, Orban recently urged Britain to remain part of the E.U. — but he did so most likely because E.U.-skeptical Britain is an important partner for the Budapest-based government.

Orban is planning to hold a referendum in Hungary that could hurt E.U. cohesion. After last year’s influx of refugees into the country, Hungarians will be asked to decide whether the E.U. should be allowed to resettle refugees despite a lack of consent by national parliaments affected by the decision.

In Hungary, it might not be a clear-cut “in or out” referendum about E.U. membership that could cause trouble but rather a referendum that is designed to indirectly question Brussels’s authority.

The French are some of the biggest E.U. skeptics: 61 percent have an unfavorable view of the union. (In comparison, in Hungary, only 37 percent of the population hold a similar opinion.)

Besides Germany, France is continental Europe’s driving force. But it also faces a multitude of problems, including a weak economy and a high terrorism threat. Some of the origins of these problems have been blamed on the E.U. or conditions created by its member states.

German Chancellor Angela Merkel, for instance, is widely known for her support for austerity measures that were adopted after the last recession. Contrary to Germany, France still has not managed to fully escape high unemployment numbers and weak economic growth. Many French also watched with disbelief when Merkel opened Germany’s borders to Syrian refugees in 2015.

This could play into the hands of the right-wing National Front party, which is expected to gain more political power in upcoming elections. The party’s leader, Marine Le Pen, has supported Brexit — indicating what could be next for France should her party ever rule the country.

Scotland as a particular case

Britain has had two crucial referendums within only two years, but it might need to prepare for a third one — and potentially Europe’s only pro-E.U. referendum in a long time. Scotland voted to remain part of the United Kingdom in 2014, but the country is mostly pro-European Union.

Considerations to join the E.U. are only thought experiments at this stage, but they are being conducted surprisingly publicly and in a detailed manner. Scottish First Minister Nicola Sturgeon, who is a member of the Scottish National Party, said Scotland will be weighing its options.

Asked whether Scotland would really be prepared for another referendum on splitting from the United Kingdom, Sturgeon said that the issue was “definitely on the table.”