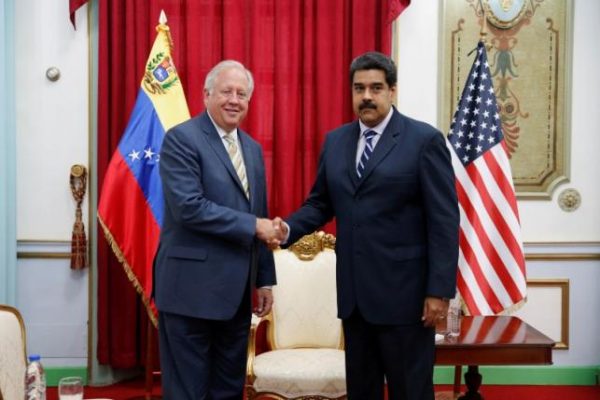 During 17 years of socialist rule under Maduro and his predecessor Hugo Chavez, Venezuela has replaced Cuba as Washington’s principle irritant in the Americas.

The United States is backing an opposition push to hold a “fair and timely” referendum this year that could see Maduro ousted. However, U.S. Secretary of State John Kerry agreed in talks with Venezuelan Foreign Minister Delcy Rodriguez last week to re-start dialogue.

Shannon and Maduro, 53, met after lunch in the Miraflores presidential palace in Caracas. Maduro then took to the stage in front of thousands of supporters in the capital city.

“It’s never too late,” he told them, clad in a shirt and blazer rather than his usual tracksuit or baggy shirt. “I hope President Obama will rectify the position he has held the last eight years against the revolution.”

Their meeting came the day before the Organization of American States was to discuss a proposal by its head, Luis Almagro, to invoke the regional body’s Democratic Charter, which could eventually lead to a vote on suspending Venezuela.

Maduro attacked opposition congress head Henry Ramos for his involvement in the meeting.

“Mr (Ramos) takes his private jet and goes to Washington to conspire against his own country,” he said during the televised speech.

Shannon met with Ramos on Tuesday afternoon, as well as Henrique Capriles, the two-time presidential candidate who lost to both Chavez and Maduro and is now spearheading the push for a referendum.

Maduro may be hoping the meeting eases international pressure on him, analysts and diplomats said, while Washington likely calculates a rapprochement undermines Venezuela’s constant blame on “imperialist” foes for the nation’s problems.

“Kerry indicated last week that the U.S. wants to see a recall referendum this year, and bilateral talks will help to offset what would otherwise be fodder for Maduro to declare that the U.S. is trying to overthrow his regime,” the Eurasia consultancy group said.

Shannon, a former U.S. ambassador to Brazil and current Under Secretary of State for Political Affairs who speaks Spanish and Portuguese, was likely to press for the release of jailed opponents including Lopez.

He is also expected to push for internationally mediated talks between Maduro’s government and the opposition to try and ease political strains behind the crisis.

The Venezuelan opposition leader was sentenced to nearly 14 years for instigating 2014 anti-Maduro protests that led to violence killing 43 people across both sides.

Rights groups and government critics say the trial was a farce.

After meeting Shannon on Tuesday, Capriles said Maduro was seeking to use dialogue to buy himself time due to his inability to solve Venezuela’s worsening economic crisis.

“Someone who has not eaten for five days cannot wait for dialogue,” he said, referring to widespread food shortages around the nation of 30 million people. “We’re not here for photo ops. Venezuela doesn’t have time for that.”

Since Chavez took office in 1999, Venezuela and the United States have gone through cycles of diplomatic fighting followed by generally short-lived eras of reconciliation.

They have been without ambassadors since 2010.

Through it all, Venezuela has kept oil flowing north uninterrupted, and is the third biggest U.S. supplier after Saudi Arabia and Canada, according to the latest U.S. data.