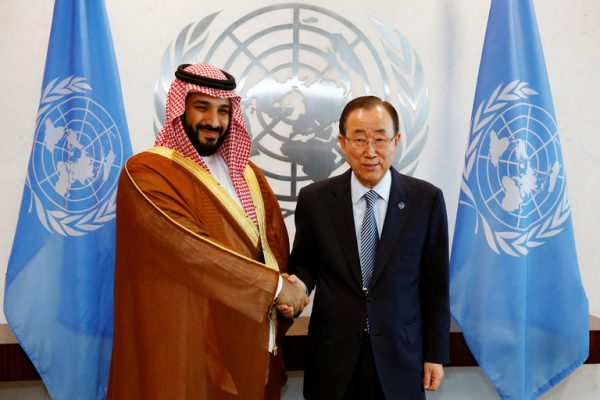 If you’re the secretary general of the United Nations, you sometimes have awkward meetings.

The secretary general, Ban Ki-moon, had one of those sessions on Wednesday. Mohammed bin Salman, the powerful deputy crown prince of Saudi Arabia, came with an eight-member delegation to discuss, among other things, Mr. Ban’s decision to cite the Saudi-led military coalition in Yemen for violating the rights of children during the conflict there.

Worse, the prince arrived 45 minutes late, delaying Mr. Ban’s schedule for the rest of the day.

Mr. Ban had initially included the coalition on an ignoble list of armies accused of killing and maiming children in 2015, only to take it off a few days later, saying bluntly that he had been threatened with the loss of funding to humanitarian programs.

The list was included in a report, Children and Armed Conflict. Whether the coalition, which has been repeatedly accused by human rights organizations of indiscriminately bombing nonmilitary targets in Yemen, might be restored to the list remains a matter of debate. The Saudi ambassador to the United Nations, Abdullah bin Yahya Almouallimi, insisted that the decision to remove it from the list was “irreversible.” On Wednesday, it was left to Mr. Ban to manage the ungainly diplomatic moment with an oblique statement that urged Saudi officials to “improve the situation on the ground.”

His statement also left the ball in the Security Council’s court, for it is scheduled to discuss the report in August. Saudi Arabia has powerful backers on the Council, including the United States. Two Council members, Egypt and Senegal, are part of the Saudi-led coalition in Yemen.

A United Nations spokesman, Stéphane Dujarric, has previously said the organization would not divulge its sources of information, but welcomed any additional information from the coalition. The United Nations has been noncommittal on the Saudi proposal to send its experts to Riyadh.

In any case, as Mr. Ban’s special representative for children in armed conflict, Leila Zerrougui, pointed out, Saudi Arabia has already had the opportunity to provide its side of the story before the report was completed.

In a recent interview, Ms. Zerrougui, an Algerian judge, said it was customary for her office to share with governments the portions of the report that apply to them. She said she did so with Saudi Arabia, and with every other nation involved.

It was not customary, however, to share the list with the countries in advance — and Ms. Zerrougui said she had not.

“I don’t want people to consider this a list of shame,” she said. “This is a call for action: Take necessary measures to stop the violations.”

Ms. Zerrougui was also accused of bias last year, not by Saudi Arabia, but by Israel. She had recommended that the Israeli Defense Forces, along with the militant group Hamas, be included on the list for their conduct in the 2014 war in the Gaza Strip. The secretary general removed both groups from the list last year, after intense lobbying by Israel and the United States.

Ms. Zerrougui said she feared that this sort of pressure from powerful countries would dissuade front-line United Nations staff from telling the truth — and that, in turn, would amount to abandoning the world’s most vulnerable. “When you are a victim and you don’t see anyone supporting you, because the people on the ground are threatened or discouraged, then we are finished. We go home,” she said.

This year, she considered resigning, but thought better of it after Mr. Ban publicly said he stood by the contents of the report.

In the interview, her first since the tangle over Saudi Arabia, she also recalled one of her earliest memories. She was 2 years old when Algerian security forces took her father to prison for his role in agitating against French colonial rule. He remained in custody for three years.

The memory has haunted her ever since. She says she knows firsthand what conflict does to a child. “I was aware, yes,” she said. “I can remember. I feel very strongly about this issue.”