Russia, Syria and Iran have made a mess of their military alliance 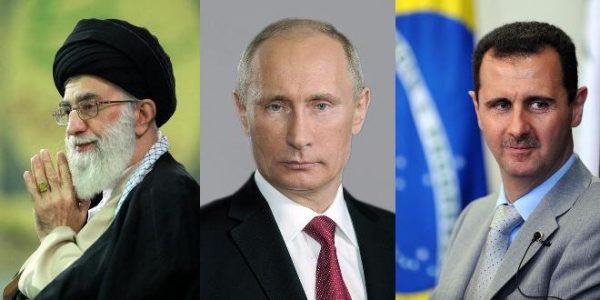 From the beginning, the general belief was that the above three stakeholders were going to work harmoniously together in the Syrian Civil War. Well, it hasn’t turned out that way. Today, Tom Cooper describes how the military forces of these putative allies are pursuing entirely different operations on the battlefield.

At the first look, the alliance between Iran, Russia and Syria seems to be based on decades-old friendship and plenty of mutual interests. However, the Syrian civil war is revealing ever-bigger differences between the governments in Moscow and those in Damascus and Tehran.

According to official Russian reports, prior to this meeting, Shoygu announced that between topics discussed would include “priority measures in reinforcing the cooperation between the defense ministries of the three countries in the fight with the Islamic State” and Jabhat Al Nusra.

According to Iranian state television, Dehghan subsequently stated that the three ministers agreed to conduct “decisive war against all terrorist groups,” but also that the trio agreed that a “comprehensive ceasefire and provision of humanitarian aid are vital in establishing firm peace in Syria.”

The official Syrian news agency SANA reported Freij saying that “Syria is bent on striking terrorism everywhere on its land, with valor and determination.” Furthermore, he added, the secretary of Iran’s Supreme National Security Council, Ali Shamkhani, should thank Shoygu for the “courageous actions and policies of Russian president and his effective support in the comprehensive fight against terrorism in Syria.”

Except for this obvious exchange of stereotypical diplomatic expressions and obvious efforts to demonstrate friendship and harmony between three allies, the results of these talks are unclear.

What is certain is that a meeting of this kind was urgently necessary because the military forces of the three governments in question are meanwhile running three entirely different major operations on the battlefield.

The Aviation Group of the Russian Airspace Force — the Vozdushno-Kosmicheskiye Sily or VKS — is conducting an interdiction campaign against Syrian insurgents active in western Aleppo governorate with intention of forcing these into negotiations on Moscow’s conditions.

While the Syrian Arab Air Force is primarily bombing civilians in Idlib and eastern Aleppo, advances against Islamic State by the U.S.-supported coalition of Kurdish and Arab militias in northern Syria have prompted Damascus into action in same direction, too.

Therefore, one of most powerful concentrations of forces loyal to the regime of Pres. Bashar Al Assad launched an offensive against ISIS in southeastern Aleppo governorate. Theses pro-Al Assad forces include private military companies such as Liwa Suqour As Sahra and Liwa Dir As Sahel, sectarian militias such as the Liwa Nussr Az Zawba’a and Quwwat Al Galilee and also a unit of Hezbollah from Lebanon.

Their operation aims to recover Tabqa Air Base and perhaps also reach the city of Raqqah, capitol of the province of same name.

Finally, a mix of Iranian Republican Guard Corps-controlled units, primarily consisting of Iraqi Shi’a militias such as Harakat An Nujba, Katayb Hezbollah, and Assaib Ahl Al Haqq — at least the last two of which are operating Russian-made T-90 main battle tanks acquired by the IRGC early this year — is running its own campaign against Syrian insurgents and foreign jihadists of the Jaysh Al Fateh coalition, or JAF, in southern Aleppo.

Obviously, these three entirely disconnected operations are illustrating complete disharmony between interests and resulting strategies of Damascus, Moscow and Tehran.

Instead of deploying their air power in support of loyalist- and IRGC-controlled ground forces, the Russians did nothing as the JAF — which is including the main group of Jabhat Al Nusra units in northern Syria — concentrated several brigade-size formations supported by dozens of tanks, armored fighting vehicles and heavy artillery in southern Aleppo, in early June 2016.

They didn’t move even when jihadists — supported by several Syrian insurgent units — assaulted IRGC’s positions east of Khan Touman, captured half a dozen of villages and strongpoints and inflicted hundreds of casualties.

Instead, the IRGC was forced to rush reinforcements from Iran, and even request help from Damascus, which reacted by re-deploying units from quiet front lines in southern Syria.

Ever since, repeated counterattacks of IRGC-controlled troops are all repulsed by the JAF, but Russians are still not moving. The VKS continues its campaign in western Aleppo as if there were no battlefield in southern Aleppo. Indeed, it even found an opportunity to fly several air strikes against villages in northern Aleppo that U.S.- and Turkish-supported Syrian insurgents had liberated from ISIS only few days ago.

Weak and worn out, the SyAAF is preoccupied with its own bombing campaign against civilians in insurgent-controlled Idlib city, Ma’arat An Nauman and eastern Aleppo. It is scarcely seen even in the skies above loyalist forces advancing on Tabqa and Raqqah.

Unsurprisingly, rumors began circulating from sources in Iraq that the regular Iranian air force has already requested permission to use the local airspace in order to deploy its own fighter-bombers to Syria.

Considering there are no indications about any significant change in aims of the three separate campaigns in the last few days, it seems that the meeting in Tehran was not particularly successful. This in turn means that the government of the Russian Federation remains insistent on avoiding getting drawn deeper into the Syrian civil war.

Moscow apparently remains insistent on its own, limited — though much more realistic — aims in this war, primarily related to securing the survival of Al Assad’s regime.

By contrast, Damascus and Tehran remain insistent on their own, less-realistic aims. Top Iranian leaders — including Dehghan — are proclaiming their intention to “liberate” all of Aleppo governorate, while Al Assad is publicly announcing a “liberation of every inch of Syria” as his new war objective.

Obviously, only time will tell which of the three governments is right. But under the current conditions, any kind of a durable ceasefire in Syria is an illusion — and something like peace is completely out of the question.

This article was originally published by War is Boring on 15 June 2016.