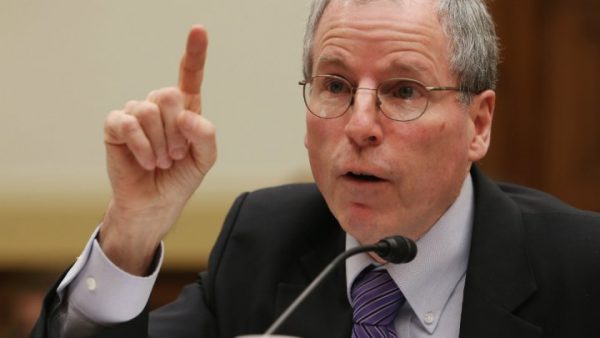 Robert Ford, Former US ambassador to Syria after his resignation in 2014
Share:

In an exclusive interview with FRANCE 24, former US ambassador to Syria Robert Ford explained why 51 American diplomats have slammed President Barack Obama’s policy on Syria as “unsustainable” and called for US airstrikes against the Syrian regime.
On Thursday, the New York Times and the Wall Street Journal revealed that 51 American diplomats had signed an internal memo attacking Washington’s stance on Syria and calling for air strikes targeting Syrian President Bashar al-Assad’s forces.

Robert Ford, who served as the US ambassador to Syria between 2011 and 2014, spoke to FRANCE 24 on June 17 about the background to the memo and why the diplomats feel it is necessary for the US to strike the Syrian regime.

What do you think of the memo signed by the 51 diplomats, and what does it say about US policy on Syria?

It is a message telling Secretary of State John Kerry that the current policy is failing and that it cannot succeed, that it will continue to fail. It is a memo that says that more must be done to put pressure on the Assad government. It is suggesting that we need limited American strikes against Assad government targets so that Assad understands the ceasefire must be respected, and that there must be compromises and more acceptance of the moderate Syrian opposition in the negotiations.

So this pressure is supposed to make political negotiations possible, and to make a solution possible that would end the Syrian civil war, and also to convince Syrian Sunnis to help fight Daesh (an acronym for the Islamic State (IS) group). The American policy is focusing its effort only on the Islamic State [group] and not on Assad, and it is a policy which will not create a sustainable solution because the IS group will always be able to recruit new fighters with this existing policy.

The number of diplomats who signed this memo is impressive. Is it unprecedented? What weight does it carry?

In my experience, dating back to 1985, never has there been a dissenting message signed by so many people. The normal number for a dissenting message is two, three, four, five people. So it’s really remarkable. It says that a large number of people who work on different parts [of Washington’s policy on] the Syrian conflict are all in agreement that it’s failing. I see American diplomats who are frustrated, like I was when I resigned in 2014.

What will happen now?

The diplomats who are criticising Obama have little chance to be heard. Obama gave a long interview three months ago in The Atlantic magazine. I saw nothing which indicates to me that Obama will change his policy.

Is it surprising? It’s unusual to see a president change course in policy at the end of his term, especially on a foreign policy topic.

Maybe, but shouldn’t a failing policy be changed, without considerations like the end of a president’s term? Because it is not a complaint about John Kerry, it is a message sent to Kerry which targets Barack Obama’s administration.

Was it directed to Hillary Clinton, too? Can this affect the presidential campaign in any way?

No. Hillary Clinton already said publicly that more needs to be done in Syria. She has already shown her difference with Barack Obama. The memo should not have a big effect on the campaign.