Paris,which began preparations for the visit of its Foreign Minister Jean-Marc Ayrault to Beirut on the tenth of July, is seeking to further consultations with the regional and international powers to push towards helping Lebanon out of the political impasse linked to disruption of the election of a president for more than two years now, according to the daily.

In a somewhat related development Wiam Wahhab, a close ally of Syria and Hezbollah told Free Patriotic Movement founder MP Michel Aoun that he has an “authorization” from Hezbollah to negotiate with former Lebanese PM and Future movement leader  Saad Hariri over the latter’s possible return to the premiership under the country’s next president. 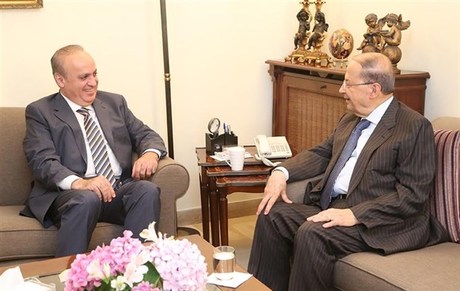 Wahhab voiced his remarks after visiting  Aoun at his residence  in Rabieh.

“He is the only one who has this authorization,” he stressed.

Wahab accused Hariri of obstructing the election of a president in Lebanon .

The Lebanese parliament failed again earlier this month  and for the 40th time in a row to elect a president to replace Michel Suleiman whose term ended on May 25 , 2014.

Speaker Nabih Berri a key ally of Hezbollah postponed the election to June 23.

Marada Movement leader Suleiman Frangieh, who was tipped by Hariri to run for office, also abstained from attending the session to conform with the stance of his March 8 allies.

The presidential race is pitting Frangieh against Aoun, who is backed by Hezbollah, some March 8 allies and Lebanese Forces leader Samir Geagea. Berri and MP Walid Jumblatt also back Frangieh’s presidential bid, along with some March 14 allies and independent lawmakers.

One analyst ridiculed Wahhab’s mediation effort. “Lebanon is not Iran”,     he told Ya Libnan , adding  “and Nasralllah  is not Lebanon’s supreme  leader “.