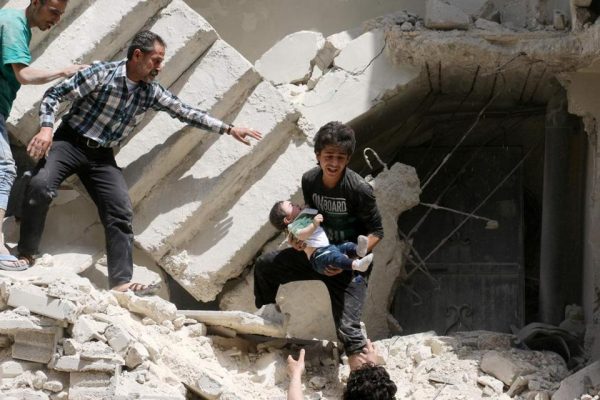 Syrians evacuate a toddler from a destroyed building following a reported air strike on the rebel
Share:

Syria’s largest city, Aleppo, used to be the country’s economic locomotive but four years of grinding battles have rendered it almost uninhabitable. Pummeled by bombs and rocket fire, residents on both sides of this divided metropolis have experienced severe water and power shortages, soaring living costs, and collapsing public services.

In 2012, the city split between rebels and forces loyal to Syrian President Bashar Assad. Now the prospect of a total siege looms over both sides.

As government forces mount attacks to close the only road to the opposition-held areas in the east of the city, rebels outside Aleppo are slowly constricting the passage to the western, government-held side.

After a two month lull following an internationally-brokered cease-fire in February, the death toll is rising on both sides. The Syrian Observatory for Human Rights, a Britain-based monitoring group, recorded that 302 civilians in opposition neighborhoods have been killed in presumed Russian and government airstrikes since hostilities resumed on April 22. In that time, 236 civilians have been killed in indiscriminate shelling and rocket attacks by the rebels.

Locals across the city worry that a day will come when they can no longer go in or out of their neighborhoods.

“People are saying ‘goodbye’ as though they don’t know whether they will see each other again,” said an Aleppo native who has fled to Lebanon and last visited her home, in the government-held side, in May. Like many others who spoke to The Associated Press, she asked for anonymity for fear of being stopped at a checkpoint and questioned for speaking to the media.

“It has never been so bad before,” she said of her hometown.

The U.N.’s children agency, UNICEF, estimates 1.5 million people live under government control in the city. As recently as January, the government and NGOs were filling rocket craters and fixing street lights, managing water wells, and distributing food baskets and other handouts, according to one family that left government-held Aleppo for Lebanon.

Any sense of normalcy has since been shattered by an intensifying barrage of rebel-launched rockets and mortars, and a tightening siege.

“You don’t go outside unless you need to,” said the Aleppo native who described how mortars made of repurposed kitchen gas canisters had landed on two buildings near her house, once killing three members of the same family. “You don’t know where a rocket will fall.”

Residents of the government-held Sheikh Najjar industrial suburb, to the northeast, described even greater hardships.

“Power comes only one hour a day,” said Imad al-Khal, 63, a commercial director at a textile company. “I can’t leave my house because I’m afraid it will be ransacked. I couldn’t go to my job for two weeks because the road was unsafe.”

Aleppo’s drinking water is piped in from the Euphrates River, about 80 kilometers (50 miles) to the east. Its long route leaves it vulnerable to sabotage. UNICEF says opposition groups interrupted supply to the government side more than 40 times in the summer of 2015.

It was cut again this week, according to Syrian state media, which sent a camera crew to interview passers-by on a bridge overlooking Aleppo’s normally meager Queiq River. On Thursday, teenagers were doing backflips into its swift, clear flow.

“We see the river is full with water and we have none,” an unidentified resident told the Al-Ikhbariya TV correspondent, with a flash of anger not often seen on state media. “How long can we bear it? All of Syria has its provisions except Aleppo.”

Many on the western, pro-Assad side once relied on government salaries or pensions for income but these have now been eroded by soaring inflation.

Conditions in the opposition-held areas, where the international advocacy group Physicians for Human Rights estimates 350,000 residents still live, are even worse.

Supplies can enter only through the perilous Costello road, which comes under regular fire from jets and artillery. Costello has been closed for a week because of bombardment and shelling, according to Aleppo activist Farj Abu Muhammad. Government offensives on the surrounding Handarat and Mallah neighborhoods, though so far repelled by rebel groups, have put the passage in further peril.

Warplanes constantly soar overhead, and the city is rocked by regular, ear-splitting explosions.

The rebels “have six and one-third functioning hospitals,” said Hamza Khatib, an emergency room physician and activist in the eastern side of the city. The one-third, he said, is the remaining part of the Al-Quds Hospital where he practices, which was heavily damaged in an airstrike on April 27. That attack killed dozens of medical staff, patients, and other civilians.

Social life has moved underground, to basements where children can play games while bombs fall above and adults can read and watch television- especially soccer, Khatib said, now that the UEFA Euro Cup has begun. There are four well-known shelters used for larger community events, according to the doctor. Some of these spaces double as libraries. Schools, however, are still above ground.

Aleppo was once a productive and cosmopolitan city: socially, economically, and religiously diverse. It is now the emblem of the country’s stalemated war. Families have been torn apart, both by politics and physically. It now takes 13 hours to cross the city, residents say.

If there is any strategy behind the sieges and constant bombardment, it is not apparent to Aleppo’s residents. As they confront the possibility of a full siege, attitudes are hardening.

“I don’t think we will ever reunite,” said one man, of fighting age, who lives in a government-held area. “There is too much blood.”