The world says goodbye to ‘The Greatest’: Muhammad Ali laid to rest 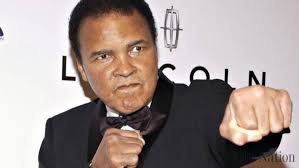 The star-studded service ended with a moment of silence and a closing prayer. His family walked slowly out of the building and is heading for a private ceremony at the Muhammad Ali Center a few blocks away.

Former President Bill Clinton has closed out the memorial service to Muhammad Ali by calling him a “man of faith” who took “perfect gifts we all have” and released them to the world.

“Being a man of faith, he realized he would never be in full control of his life. Something like Parkinson’s could come along,” Clinton said. “But being free, he realized that life was filled with multiple choices. It is the choices that Muhammad Ali made are what brought us all here today.”

Clinton noted that Ali never felt self-pity because of the Parkinson’s disease he battled for three decades, and said he continued to give himself to the world as “a universal soldier for our common humanity” long after his diagnosis.

“I think Ali decided at a very young age to write his own story,” Clinton said. “He never got credit for being as smart as he was.”

And, Gumbel says, he did it without changing his nature or compromising his principles.

“He gave us levels of strength and courage we didn’t even know we had. Hating people of color is wrong, Ali said, and it doesn’t matter who does the hate. It’s just plain wrong.”

Gumbel lamented that the three-time heavyweight champion had finally gone down.

“And for once he won’t get up. Not this time. He is down.”
Billy Crystal drew fast laughs when he took to the stage at Muhammad Ali’s memorial service.

“We’re at the halfway point,” he joked. The memorial has been underway for more than 2½ hours after a morning full of remembrances.

He joked that he was clean shaven when the day’s activities began.

Crystal cracked everyone up with his career-making impersonation of a boastful, fast-talking Ali — and his imitation of Ali’s foil, sportscaster Howard Cosell — and rhapsodized about Ali’s charisma, outspokenness and talent.

He called the boxing great “a tremendous bolt of lightning, created by Mother Nature out of thin air, a fantastic combination of power and beauty.

“Ali forced us to take a look at ourselves. This brash young man thrilled us, angered us, confused us, challenged us, ultimately became a silent messenger of peace and taught us that life is best when you build bridges between people and not walls.”

In her first public remarks since his death, she talked about how Ali wanted to be remembered after his passing.

“Muhammad indicated that when the end came for him, he wanted to use his life and his death as a teaching moment. He wanted to remind people who are suffering that he had seen the face of injustice,” she said. “He never became bitter enough to quit or engage in violence.”

She reminded those listening that his message still resonates. She says he was prepared to sacrifice all he had, all that he was, to follow his soul.

She also recalled the Louisville police officer who first taught a young Ali how to box when his bicycle was stolen when he was 12.

“Joe Martin handed young Cassius Clay the keys to a future in boxing he could scarcely have imagined.

“America must never forget that when a cop and an inner-city kid talk to each other, then miracles can happen,” she told the crowd to sustained applause.

Senior White House adviser Valerie Jarrett has read a letter from President Barack Obama at Muhammad Ali’s memorial in which Obama praised Ali for inspiring “a young mixed kid with a funny name to have the audacity to believe he could be anything, even the president of the United States.”

Obama was unable to make the trip because of his daughter Malia’s high school graduation. Jarrett said she was chosen to go instead because she knew Ali for 45 years.

Obama’s letter said Ali was bigger than America, and it noted the world flocked to the champ “because Muhammad Ali was America. Brash. Defiant. Pioneering. Never tired. Always game to test the odds. He was our most basic freedoms: religion, speech, spirit. He embodied our ability to invent ourselves. His life spoke to our origins of slavery and discrimination and the journey he traveled shocked our consciousness and led us on a roundabout path toward salvation.

“And like America, he was always very much a work in progress. We do him a disservice to gauze up his story, to sand down his rough edges, to talk only of floating like butterflies and stinging like bees. Ali was a radical, even in a radical of times. A loud and proud and unabashedly black voice in a Jim Crow world.”

Two rabbis have spoken at the interfaith memorial service for Muhammad Ali, with one of them receiving four standing ovations and leaving the crowd chanting, “Ali! Ali! Ali!”

Rabbi Michael Lerner gave a fiery speech in which he declared that American Jews stand in solidarity with Muslims, saying they will not tolerate politicians demonizing an entire religion by the actions of a few.

He says Ali stood up to an immoral war and risked fame and fortune to speak truth to power.

He listed progressive causes such as ending war, leveling the gap between the rich and the poor and eliminating racism in the criminal justice system.

“The way we get security is for the United States to become known as the most generous and caring country in the world, not the most powerful,” he said.

He referred to the next president as “she.” The crowd went wild and the camera found former President Bill Clinton, husband of presumptive Democratic presidential nominee Hillary Clinton in the audience, smiling and clapping.

Later, Rabbi Joe Rapport of Louisville said Ali was “the heart of our city … and that heart beats still.”

“The friendship we developed I think was puzzling to many people, especially to those who only saw our differences,” he said at Ali’s memorial service. “I’d say that where others saw differences, Ali and I saw kinship.”

Hatch says he once took Ali to a children’s hospital in Salt Lake City, where they visited with downtrodden children.

“Ali held those kids and looked into their eyes. They would grin from ear to ear,” Hatch said. “The nurses were astounded. Never before had they seen someone who had connected so immediately and profoundly with these sick children.

“He may have been a tough and tenacious man in the ring, but he was compassionate and tender around those who he loved.”

Louisville pastor Kevin Cosby says Muhammad Ali loved everyone, whether they lived in the penthouse or the projects.

Cosby was among several faith leaders who spoke at Ali’s memorial service on Friday in Louisville. He likened Ali to such racial barrier-breakers as Jesse Owens, Rosa Parks and Jackie Robinson.

He says the boxing great “dared to affirm the power and capacity of African-Americans.”

Cosby says Ali infused African-Americans with a “sense of somebodiness.”

Louisville police estimate that more than 100,000 people turned out for Muhammad Ali’s funeral procession in his hometown.