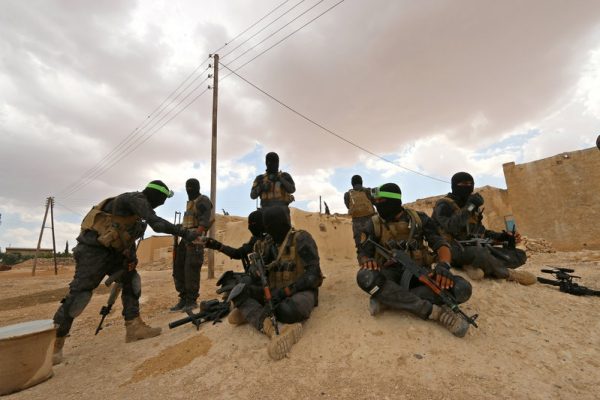 Special forces from the Syria Democratic Forces gather in Haj Hussein village, after taking control of it from Islamic State fighters, in the southern rural area of Manbij, in Aleppo Governorate, Syria May 31, 2016. REUTERS/Rodi Said
Share:
Syrian government troops backed by Russian air power moved to within 25 km (15 miles) of an Islamic State-held town in Raqqa province on Tuesday, the Syrian Observatory for Human Rights said, as state media reported air strikes against the jihadists in the area.

In a separate simultaneous campaign against Islamic State in Syria, U.S.-backed militias captured more territory from the group near the city of Manbij in Aleppo province, a spokesman for the forces told Reuters. The Observatory said they were now 2 km from the Islamic State-held city.

The offensives both got underway last week and are targeting Islamic State in areas of major strategic importance to its foothold in Syria, where it controls swathes of land up to the Iraqi border.

They are taking place at the same time as an assault by the Iraqi army against Falluja, an Islamic State bastion close to Baghdad. The simultaneous assaults by a myriad of enemies on farflung fronts amount to some of the greatest pressure Islamic State has faced since declaring its caliphate to rule over all Muslims from Iraq and Syria two years ago.

The Syrian army’s advance into Raqqa province, which has not been announced by the military, is initially targeting the Islamic State-held town of Tabqa, according to the Observatory and pro-Damascus media sources.

Raqqa province is a major base of operations for Islamic State and home to its de facto capital, Raqqa city.

The Syrian military could not immediately be reached for comment. A military source told Reuters on Monday the army had advanced to the edge of Raqqa province, from where it could move in several directions against Islamic State.

The Observatory, citing its activists on the ground, said Islamic State had sent weapons and fighters from Raqqa city to Tabqa.

The separate U.S.-backed campaign that got underway last week aims to dislodge Islamic State from its last foothold at the Syrian-Turkish frontier and shut off its main access route to the outside world for material and manpower.

It is being fought on the ground by militias including the Kurdish YPG and allied Arab groups, which together formed an alliance last year known as the Syria Democratic Forces. It has proven to be the first effective fighting force allied to Washington during five years of multi-sided civil war in Syria.

Sharfan Darwish, spokesman for the Manbij Military Council that is part of the U.S.-backed force, said: “We are advancing on all fronts of our assault.”

The United States has consistently rejected the idea of partnering in the fight against Islamic State with President Bashar al-Assad, saying he should leave power. Some of Assad’s opponents have accused the Kurdish YPG of coordinating with his government’s forces, which the Kurds deny.