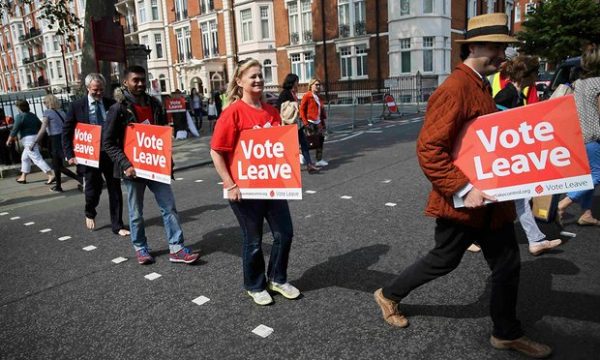 Vote Leave supporters holding banners cross the road outside the Chelsea flower show in London. Photograph: Neil Hall/Reuters
Share:
Public opinion has shifted towards the UK leaving the EU, two Guardian/ICM polls suggest as the referendum campaign picks up pace – with voters split 52% -48% in favour of Brexit, whether surveyed online or by phone.

Previous polls have tended to show voters surveyed online to be more in favour of Britain leaving the EU. But in the latest ICM research, carried out for the Guardian, both methodologies yielded the same result – a majority in favour of leaving.

“Our poll rather unhinges a few accepted orthodoxies,” said ICM’s director, Martin Boon. “It is only one poll but, in a rather unexpected reverse of polling assumptions so far, both our phone poll and our online poll are consistent on both vote intentions and on the EU referendum.”

Sign up to our EU referendum morning briefing
Read more
Using online polling, 47% said they would like to leave and 44% remain, with 9% saying they were undecided. Excluding the latter, the result was the same as the phone method – 52-48 in favour of leaving.

The result using the online method is almost unchanged, but the phone polling appears to be picking up a shift towards leaving the EU, despite a slew of warnings from the most senior members of the government about the economic risks of doing so.

When ICM carried out a poll for the Guardian in mid-May, remain had a 10 percentage point lead among those polled by phone, on 55% to 45%. The online method produced the same result as the latest one: 52% for leave compared with 48% for remain.

This latest result is likely to alarm the Stronger In Europe campaign, which had previously taken comfort from the tendency for phone polls to deliver a pro-remain verdict.

Boon said the polling suggested there would be a healthy turnout in the referendum. Asked how likely they were to vote on 23 June, more than 60% of respondents on both methods gave a score of 10 out of 10, which he said pointed to a turnout of 60-62%.

As well as checking voters’ intentions for the referendum, ICM asked which party they would vote for. The findings were almost unchanged compared with mid-May, with the phone poll showing the Conservatives on 36%, and Labour down 2 percentage points at 32%.

Support for Ukip appeared to have picked up, perhaps aided by the prominence of the party’s leader, Nigel Farage, during the referendum campaign and the focus on immigration in the debate. The party scored 15% in the phone poll, up 2 percentage points from last time.

Gisela Stuart, the chair of Vote Leave and a Labour MP, told the Guardian recently that the party’s backing for remaining in the EU was “a recruiting agent for Ukip”.

Support for Brexit is split along class and geographical lines, according to ICM. Among skilled manual workers, known by pollsters as C2s, support for Brexit is running as high as 62%. Scotland is for remain, while voters in England and Wales would back Brexit.

ICM Unlimited interviewed 1,004 people by phone, and 2,052 people online on 27-29 May 2016. Interviews were conducted across the country and in both cases the results have been weighted to the profile of all adults. ICM is a member of the British Polling Council and abides by its rules.
The Guardian