No Sanders-Trump Debate? Too bad! Trump changes his mind 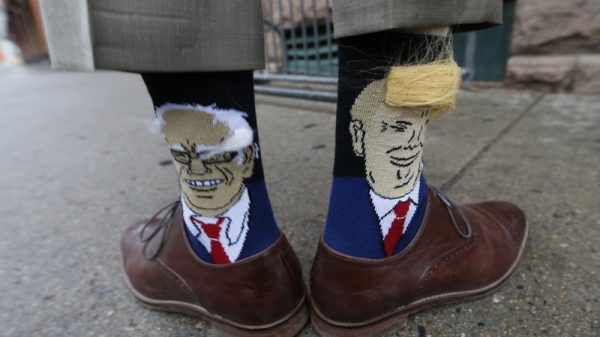 Colorado Gov. John Hickenlooper shows off his socks — one with Democratic presidential candidate Bernie Sanders and the other with Republican candidate Donald Trump. David Zalubowski/AP
Share:

The would-be Bernie Sanders vs. Donald Trump throwdown will only live on in the minds of comedy writers.

But on Friday, Trump released a statement saying he wouldn’t be facing off with Sanders since he will probably lose the Democratic nomination to Hillary Clinton.

“Based on the fact that the Democratic nominating process is totally rigged and Crooked Hillary Clinton and Deborah Wasserman Schultz will not allow Bernie Sanders to win, and now that I am the presumptive Republican nominee, it seems inappropriate that I would debate the second-place finisher,” Trump said.

On Wednesday, Trump responded to a question Sanders had sent via Kimmel on whether the Republican would debate him since Clinton wouldn’t agree to another Democratic debate before the June 7 primaries in California and five other states.

“Are you prepared to debate the major issues facing our largest state and the country before the California primary? Yes or no?” Kimmel asked on Sanders’ behalf.

He said he would agree to the debate only if the money networks raised from it went to charity. On Thursday, he elaborated, saying that “if we can raise $10 million or $15 million for charity” that would go to “maybe women’s health issues or something” he would be game.

Sanders also appeared on Kimmel Thursday night and sounded hopeful about the ability to debate a man who is his political polar opposite.

“You made it possible for us to have a very interesting debate about two guys who look at the world very, very differently,” he told the late-night host.

On Friday afternoon, the Sanders campaign said it had received two offers from major broadcast networks to televise such a debate and that both included “a major contribution to charity.”

“We are prepared to accept one of those offers and look forward to working with the Trump campaign to develop a time, place and format that is mutually agreeable,” Sanders campaign manager Jeff Weaver said in a statement. “Given that the California primary is on June 7, it is imperative that this all comes together as soon as possible. We look forward to a substantive debate that will contrast the very different visions that Sen. Sanders and Mr. Trump have for the future of our country.”

But about 30 minutes later, a statement from the Republican’s campaign shot down that possibility, arguing that the networks wouldn’t really give a significant amount to charity.

“Likewise, the networks want to make a killing on these events and are not proving to be too generous to charitable causes, in this case, women’s health issues,” Trump continued. “Therefore, as much as I want to debate Bernie Sanders — and it would be an easy payday — I will wait to debate the first-place finisher in the Democratic Party, probably Crooked Hillary Clinton, or whoever it may be.”

Back in January, Trump refused to participate in a Fox News debate after previously clashing with moderator Megyn Kelly and instead held a counterprogram he said raised $6 million for veterans groups. But a Washington Post investigation found that much of that money still hadn’t been allocated, and Trump only donated the $1 million of his own money he promised after the Post pressed him on his claim.

For those still dreaming about a Trump-Sanders debate, there is a comedy duo touring the country and putting on such a show. Back in March, they brought their impressions to Comedy Central’s @midnight with Chris Hardwick..