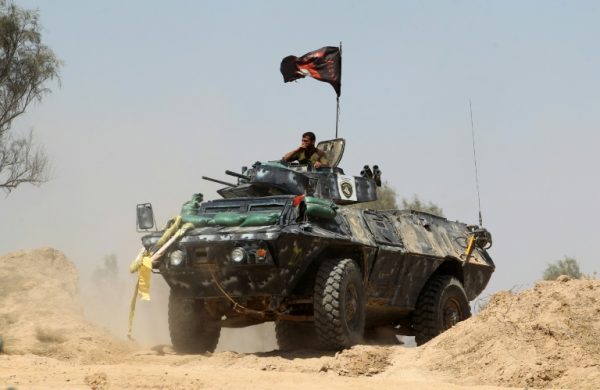 Iraq government forces supported by US airstrikes retook a town from ISIL
Share:

Iraqi security forces and supporting militias have retaken the key town of Karma from ISIS, the government’s first significant victory in its push to reclaim Falluja, a spokesman for Iraq’s Joint Operations Command said Thursday.

The recapture of Karma, about 16 kilometers (10 miles) northeast of Falluja, brings most of the territory east of Falluja under government control.

Iraqi government troops, backed by Shiite militias known as the Popular Mobilization Units and an air campaign by the U.S.-led anti-ISIS coalition, launched an offensive Monday to retake Falluja, about 65 kilometers (40 miles) west of Baghdad.

It remains, along with Mosul, one of the last two Iraqi cities under the Sunni terror group’s control.

Prime Minister Haider al-Abadi posted a statement on Facebook congratulating the people of Iraq on the “liberation of al-Karma” and ordered security forces to protect civilians there.
“We are all united to liberate Falluja and save its people from the terror of ISIS,” he later tweeted.

Some fighting is ongoing to clear the western parts of Karma of small pockets of ISIS fighters.
Iraqi security forces have spent the better part of a year trying to retake Karma from the terror group, suffering heavy losses.

The United Nations said it fears an estimated 50,000 civilians trapped in Falluja ahead of the government advance are at extreme risk.

“We are receiving distressing reports of civilians trapped inside Falluja who are desperate to escape to safety, but can’t,” Lise Grande, the U.N.’s humanitarian coordinator for Iraq, warned in a statement Wednesday.

Iraq’s government has airdropped leaflets and broadcast advisories to residents to flee through “safe corridors” established by the military to camps outside the city, or wave white flags over their homes if they are trapped.

But activists said ISIS is preventing residents from leaving, and U.N. officials have said some have died trying to escape.

About 800 people had been able to flee to safety since Sunday, with most hailing from outlying areas, the U.N. statement said.

Some walked for hours in dangerous conditions to reach camps set up in Amiriyat al-Falluja, a city about 30 kilometers (19 miles) to the south.

“The U.N. and its partners have humanitarian teams and supplies on the ground,” Grande said. “We’ve already begun providing people with food, water and shelter as they arrive and we’ll be there as more people arrive.”

Those who made it out described dire humanitarian conditions in Falluja, which has had supply routes cut off since government forces retook nearby Ramadi in December.

“Food supplies are limited and tightly controlled. Medicines are exhausted and many families have no choice but to rely on dirty and unsafe water sources,” Grande said.

The traditionally Sunni-dominated city now finds itself advanced on by troops representing the Shiite-dominated Iraqi government, supported by Shiite militias.

A statement from a Sistani representative said the cleric urged troops to follow the teachings of the Prophet Mohammed and not to kill an old man or a young boy or a woman, and not even to cut a tree, unless they had to.

Falluja, which once had a population of 300,000, was the scene of two major battles during the Iraq War, witnessing some of the fiercest fighting between U.S. forces and insurgents.

The new offensive on the city comes as an alliance of U.S.-backed Kurdish and Arab forces pushes to retake areas to the north of the de facto ISIS capital of Raqqa in neighboring Syria.