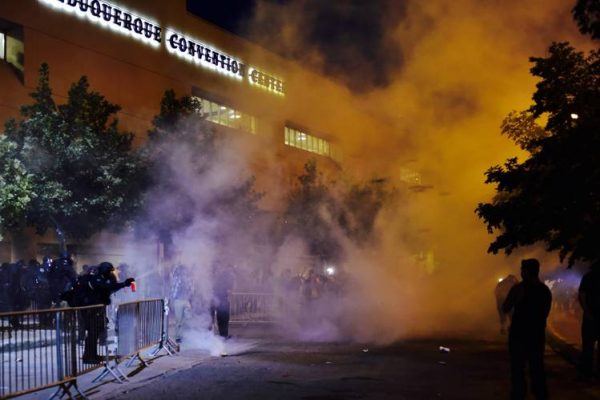 The scene outside Albuquerque’s convention center was chaotic as police ushered protesters away from Trump’s event and into the nearby streets.

There, anti-Trump protesters — many critical of his positions on immigration — loudly chanted, “F*** Donald Trump.”

Trump had already left the event.

Despite initial word of gunshots, Albuquerque’s police department said on Twitter that there was “no confirmation” of gunshots.

“There is no confirmation that any gunshots were fired, contrary to reports. Possible damage to Convention Center Windows by pellet gun,” the department tweeted.

Police reported rocks and bottles being thrown at their police horses, but downplayed their clashes with protesters on Twitter, noting that they hadn’t used tear gas and had not arrested any of the protesters.

“The smoke that has been seen is not tear gas, it’s just smoke. We have not deployed tear gas at this time,” the police tweeted.

Police added: “Only arrests at this point have been from inside the rally.”
Inside Trump’s event, protesters disrupted him sporadically. At least three were forcefully removed by police after they refused to leave.

A group of a dozen protesters in the grandstands around the stage where Trump spoke unfurled banners that read “Undocumented Unafraid” and “We’ve heard enough.” Another banner accused Trump of being a fascist.

At one point, a woman in what appeared to be a bra was throwing fake money in the air in the stands behind Trump. She was eventually escorted out by police and security.

Protesters inside Trump events have faced violence, too. One was punched at an event in North Carolina, with the Trump supporter involved in the incident later facing criminal charges.

Eventually, the Albuquerque police tweeted, “Appears that most of the @realDonaldTrump protestors have left & remaining contingent is only looking to cause trouble & be destructive.”