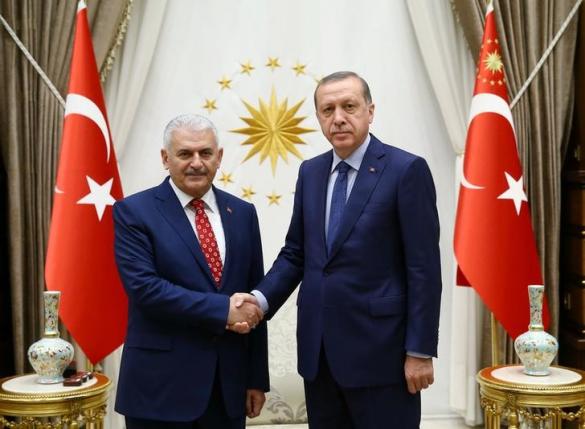 Turkish President Tayyip Erdogan confirmed Binali Yildirim, a close ally for two decades and a co-founder of the ruling AK Party, as his new prime minister on Sunday, taking a big step toward the stronger presidential powers he has long sought.

In a speech to AKP delegates who earlier elected him party leader at a special congress, Yildirim, transport minister for most of the past decade and a half, left no doubt that he would prioritize the policies closest to Erdogan’s heart.

“Erdogan is a man of purpose, a man of the people, a tireless defender of the great Turkey,” he said. “We have said with pride, heads held high, we are comrades of Erdogan … Your passion is our passion, your cause our cause, your path our path.”

Yildirim’s main aim, he said, was a new constitution and the creation of an executive presidency, a change Erdogan says will bring stability to the NATO member state of 78 million, but which opponents fear will herald greater authoritarianism.

After winning the presidency in 2014 following more than a decade as prime minister, Erdogan was legally bound to renounce ties to the AKP and remain impartial. But he has retained strong influence over both the party he founded and the government, frequently hosting cabinet meetings in his new palace.

Yildirim, 60, said constitutional change was a necessity to legitimize the existing situation, tacit acknowledgment that Erdogan has extended the traditionally ceremonial role of the Turkish presidency.

“The most important mission we have today is to legalize the de facto situation, to bring to an end this confusion by changing the constitution,” he said. “The new constitution will be on an executive presidential system.”

Yildirim was the sole candidate for party leader at the AKP congress, called after Ahmet Davutoglu announced he was stepping down as prime minister following weeks of public tension with Erdogan. Yildirim won all 1,405 of the valid votes.

As if proof were needed of where power in the party lies, delegates remained standing through a message from Erdogan read out at the start of the congress. Yildirim vowed that, under his leadership, the AKP’s way would be “Erdogan’s way”. Justice Minister Bekir Bozdag said Erdogan was the party’s one leader.

As transport minister, Yildirim was a driving force behind major infrastructure projects which were one of the pillars of the AKP’s electoral successes during its first decade in power.

He has made clear he will pursue two of Erdogan’s biggest priorities – the executive presidency and the fight against militants of the outlawed Kurdistan Workers Party (PKK) in the largely Kurdish southeast.

“Operations will continue without pause until the bloody-handed terrorist organization PKK ends its armed actions.”

Erdogan and his supporters see an executive presidency, akin to the system in the United States or France, as a guarantee against the fractious coalition politics that hampered the government in the 1990s.

His opponents, including some skeptics within the AKP, say he is merely furthering his own ambition.

“If they can succeed, this will be a transition period for the executive presidency,” journalist Abdulkadir Selvi, who is seen as close to AKP, told Reuters.

“The presidency issue will be on top of the agenda.”

For investors, the key point now will be the future of Deputy Prime Minister Mehmet Simsek, seen as one of the remaining anchors of market confidence.

Erdogan, who favors consumption-led growth, has repeatedly railed against high interest rates in Turkey, saying they cause inflation, a stance at odds with mainstream economics.

Without Simsek, investors fear, it will be less likely that the government will deliver on promises to liberalize the labor market, encourage savings and bring in more private investment.

Yildirim was elected as a deputy for Istanbul in November 2002 when the AKP won its first election. He was appointed transport, maritime and communications minister, a post he then almost continuously held in successive governments.

His ties to Erdogan date back to the 1990s when Yildirim, educated in shipbuilding and marine sciences, was in charge of a high-speed ferry company in Istanbul, where Erdogan was mayor.