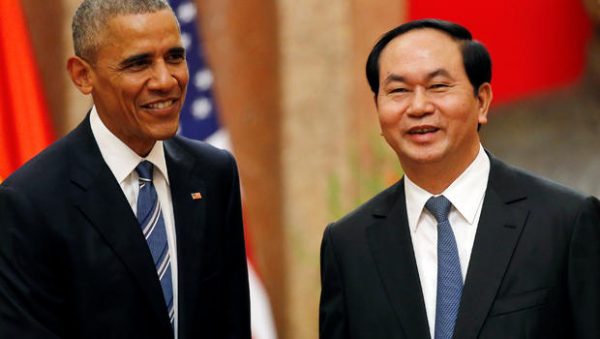 President Obama with Vietnamese President Tran Dai Quang during an arrival ceremony at the presidential palace in Hanoi, Vietnam on May 23, 2016
Share:

The South Vietnamese were demoralized after the U.S. withdrawal of combat forces in 1973 and the cessation of military support. The North Vietnamese, who had been fighting for nearly 20 years to see their homeland united under communism, seized the opportunity, launching a massive offensive.

Saigon, the South Vietnamese capital, fell, forcing the U.S. to stage a massive helicopter evacuation — generating one of the best known images of the war.

The city was renamed Ho Chi Minh City, after the revolutionary leader, and the country was united and renamed the Socialist Republic of Vietnam (SRV).

The following years were fraught with ideological battles, famine and hostilities with China.

But fast-forward to today, and Vietnam has become what some commentators have called the Germany of Southeast Asia, its dedicated workforce and export-based economy have created an economic boom.

And there is a friendship forming with its old enemy.

On Sunday, President Obama began an official visit to Vietnam before continuing on to Japan.
His visit comes nearly a year after Vietnamese leader, General Secretary Nguyen Phu Trong, was welcomed to the White House.

Such scenes would have been unthinkable in the post-war years. Vietnam had banned citizens from leaving and began efforts to unify the country under a communist ideology.

“Bureaucrats, teachers, and civil servants from the defeated Republic of Vietnam underwent quick courses in re-education,” says Christopher Goscha, author of the upcoming book, “A Modern History of Vietnam.”

“However, those who were in the government, security services, and army found themselves doing time in re-education camps. Hundreds perhaps thousands spent years in detention.”

Panicked by these developments, southerners crammed themselves into boats and fled: more than 755,000, according to the UNHCR.

The exodus continued as food shortages began to bite.

The Mekong Delta, in southern Vietnam, was home to the best rice fields. But the farmers there were resentful of the new regime and resisted attempts to increase yields.

Even if the southern farmers were amenable, the country’s economic five-year plan was wildly ambitious, expecting to grow national income by 14%.

The plan failed. And by 1979 the government had to ration food. Citizens received a mere two kilograms of rice and 200 grams of meat per month.

Within a month the war was over and, according to the Chinese, the lesson taught.

But the Vietnamese also claimed victory, saying they had beaten back their giant northern neighbor. Either way, the conflict helped to sour relations between China and the USSR, which was an ally of Vietnam.

Even though the USSR didn’t come to Vietnam’s aid in the war, they continued to be the prime funder of the SRV and even created a joint space program.

In 1980, Pham Tuan, a lieutenant colonel in the Vietnam People’s Airforce, joined the Soviet Intercosmos program and became the first Asian in space.

As Tuan orbited the Earth, Vietnam’s economy began to turn.

The Doi Moi reform program of the mid-1980s abolished the state-planned economy in favor of a “socialist-orientated market economy,” similar to China. A new five-year plan called for a 70% increase in exports.

It was the beginning of a new Vietnam.

The country would become what some have termed Asia’s quiet economic success story.

Annual income has grown from around $100 in 1986 to $2640 today — nearly double in urban areas.
In 1991, President George H.W. Bush implemented a “roadmap to normalization” easing the trade embargo that had been in place since the end of the war.

By 1994, American companies could enter the Vietnamese market and Vietnam could integrate with the global economy.

America opened a new embassy in Hanoi in 1995.

They also increased efforts to help clean up vast tracts of land poisoned by Agent Orange and committed to “clear up its brass” — to use a military term — and help dispose of unexploded remnants of war.

Today, Vietnam is increasingly worried about the presence of Chinese military in the South China Sea. It wants to buy weapons from the U.S. but is prevented by a decades-old arms embargo.

But the U.S. has said that progress on human rights is important for a full lift of the ban.

Nguyen Tan Dung, the Vietnamese premier, may have some leverage in negotiations because Obama wants to maintain U.S. presence in the region in the face of increasing Chinese assertiveness, analysts say.

“Obama is keen to join Vietnam in containing the expansion of Chinese maritime power into the Pacific,” says Goscha.

“His visit is a signal to Vietnam of the U.S. readiness to write a new page in American-Vietnamese relations, but it is also part of a wider strategy and series of relationship with other Asian countries worried by China’s expansion.”
CNN